Our family moved to this beautiful new city, Modiin, from Jerusalem in 2006.

The city was founded in 1985 and is young and modern but right in the middle of it lays a historic hill about 72000 square yards and 1000 feet high. Like many other new cities in Israel, Modiin was built next to the ruins of their predecessors. The new city began right at the site where a human settlement once thrived from the Chalcolithic (Copper) Age over 6000 years ago until Israel's Independence War in 1948.

The name Tittora is probably a corruption of Tantora, a name given to the hill by the Crusaders. The local Arabs called it Kala'at A-Tantura or El Burg, meaning  The Fortress.

In the past, a town or a village also named Modiin existed in this area and the site where the clan of Maccabees began the Jewish revolt against the Greek rulers. And since then, perhaps, we celebrate Hanukka, to commemorate that Jerusalem was liberated from the Greeks and the Temple was consecrated. 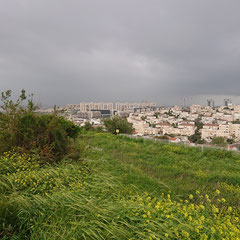 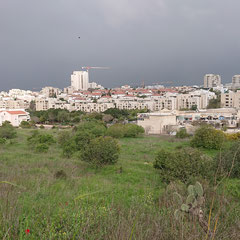 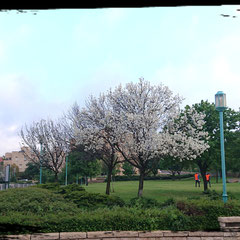 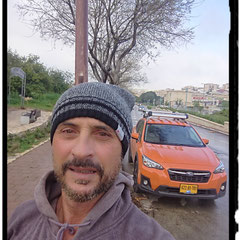 Many ritual pools or miqveh (in Hebrew), have been found at Tittora Hill.

Miqveh is a pool used for the purposes of ritual immersion to achieve ritual and body purity. It was dug into the ground and allowed to collect water by a natural spring or rainwater. The walls of the reservoir were cemented. Miqveh had to hold at least 60 gallons (227 L) of water and be deep enough to completely immerse the body.

The books of Numbers and Leviticus record the instructions for cleansing the body,

"Take the Levites from among the sons of Israel and cleanse them. "Thus you shall do to them, for their cleansing: sprinkle purifying water on them, and let them use a razor over their whole body and wash their clothes, and they will be clean" (Numbers 8:5, 7).

"When any person eats an animal which dies or is torn by beasts, whether he is a native or an alien, he shall wash his clothes and bathe in water, and remain unclean until evening; then he will become clean" (Leviticus 17:15).

"If the person has been healed of his infectious skin disease... he must wash his clothes and bathe himself with water, and he will be clean" (Leviticus 14:3, 9).

"When any man has a bodily discharge... he must wash his clothes and bathe himself with fresh water..."

"When a man has an emission of semen, he must bathe his whole body with water..."

And of course these famous words from 2 Kings 5:13, addressed to the Syrian commander:

"If the prophet told you to do some great things - would you not have done it?   How much more, when he says to you wash and be clean?"

Wash your hands, my dear readers, during these difficult times and remember the words of the prophet!

After the destruction of the Temple the purpose of miqveh not only continued to be used for cleansing of the body but also new instructions were given for when it was to be use: as a sign of conversion to Judaism, to clean new metal and glass utensils and to clean a body as preparation for burial (taharah).

During the first centuries AD, the water immersion was "practiced by the Essene community at Qumran (Dead Sea Scrolls' discovery site) as a symbolic act by which one was 'made holy by the waters of repentance' (1QS 3:9).

In that period, some Jews began to practice proselyte immersion in water in addition to circumcision and water purification was required for all the Jews for entering the Temple's precincts.

Immersion in water (baptism in Greek) was a central theme of John the Baptist’s preaching in the wilderness. Here is what Josephus Flavius, the Jewish-Roman historian, says about him:

"John, that was called the Baptist... was a good man, and commanded the Jews to exercise virtue, both as to righteousness towards one another, and piety towards God, and so to come to baptism; for that the washing [with water] would be acceptable to him, if they made use of it, not in order to the putting away [or the remission] of some sins [only], but for the purification of the body; supposing still that the soul was thoroughly purified beforehand by righteousness" (Book of Antiquities 18.5.2). 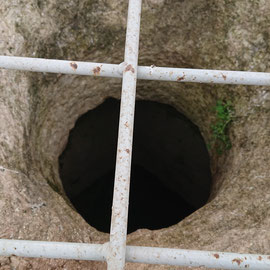 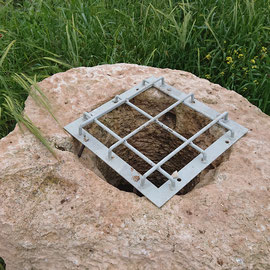 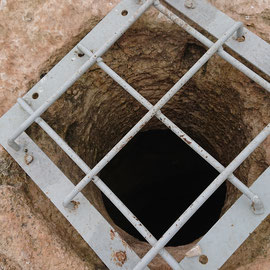 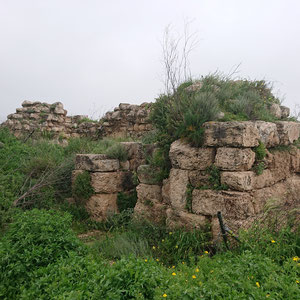 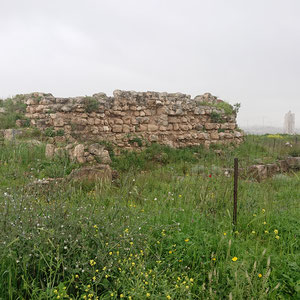 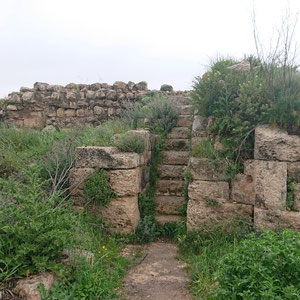 Quite a few columbariums have been found at Tittora Hill, were made for the purpose of housing nesting pigeons. The name derives from the Latin "columba" which means dove. Originally the doves were used for ritual sacrifice, and their litter was used for fertilization of the poor rocky soil in the Judean hills. 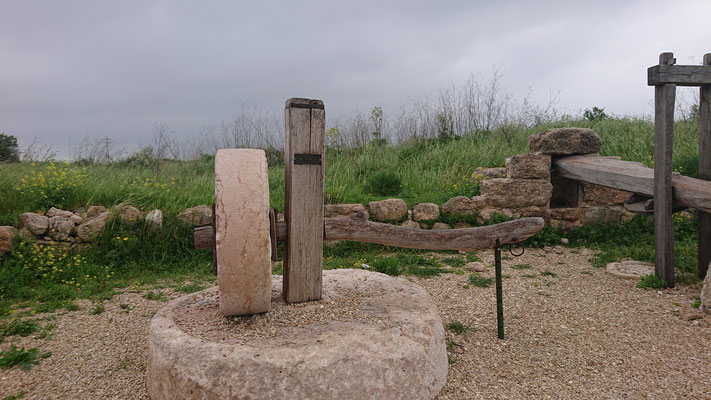 The Beauty of Spring

In the spring season, there are so many beautiful plants and trees which are in full bloom! The Land of Israel grows many types of fruit such as fig trees, almonds and pomegranates and the trees are full of gorgeous blossoms every spring.

The Franks were Germanic tribes in the Holy Land during the Crusades and they noticed this  beautiful deciduous tree blossoming in early spring which they called the tree of Judea.

The almond trees are the first to bloom in Israel each year, coinciding with the Jewish holiday of Tu B'Shvat which is the New Year for Trees.

When Jacob the Patriarch sent his sons to Eygpt with gifts during the time of famine, almonds were included as part of his offering:

Then their father Israel said to them, "If it must be so, then do this: take some of the best products of the land in your bags, and carry down to the man as a present, a little balm and a little honey, aromatic gum and myrrh, pistachio nuts and almonds" (Genesis 43:11)

Anemone is a genus of about 200 species of flowering plants.

(Read more about this beautiful plant in my article  Wildflowers of the Land of Israel.

Saint Mary's thistle or Mediterranean milk thistle (Silybum marianum) can grow to be 30 -200 cm (12 -79 in) tall and have a conical shape. The approximate maximum base diameter is 160 cm (63 in). The stem is grooved with a cottony texture and the largest specimens have hollow stems. 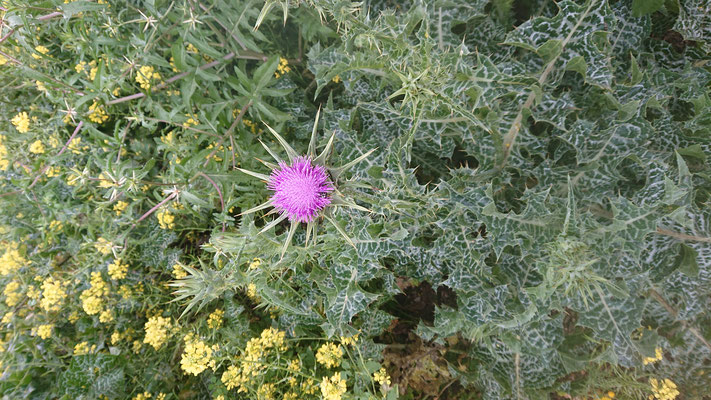 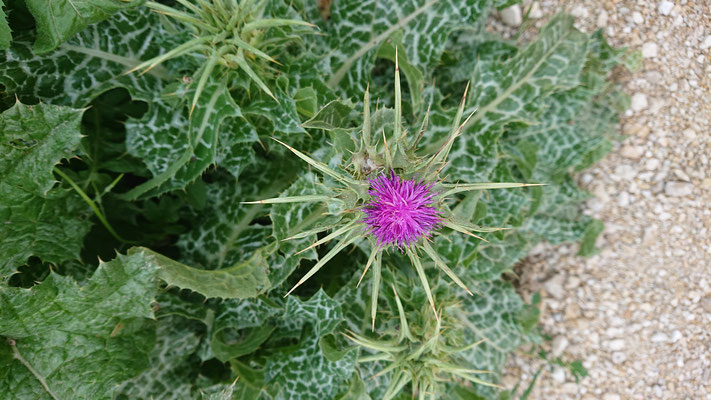 The mustard plant is a plant species called Brassica belonging to the family Brassicaceae. Mustard seed is a particularly good spice. Grinding and mixing the seeds with water, vinegar and other spices makes prepared mustard.

The seeds are very small (2-3 mm in diameter) and are referred to in the parable of the Kingdom which is recorded in the Gospels of Matthew, Mark and Luke in the New Testament. 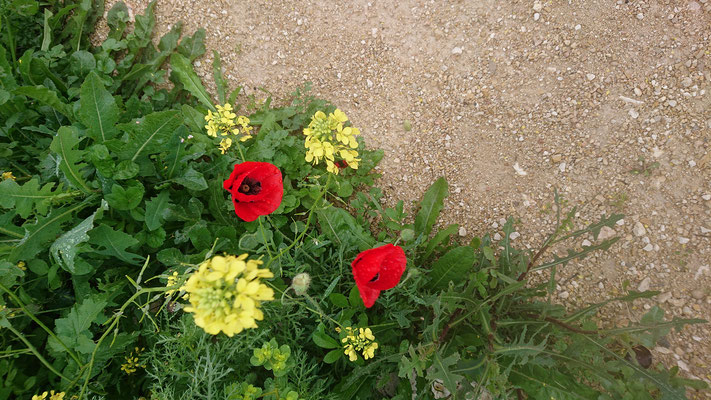 The name anise is derived from the Latin word anisum, referring to dill. In the Mediterranean region, anise is widely cultivated and used to flavor and alcoholic drinks.