The birthplace of Jerusalem is near the source of the Gihon Spring, between the Tyropoeon and Kidron valleys.

According to scientific circles, this is the birthplace of the ancient City of David.

From here, the city began to develop and expand to the west, most intensively in the 8th century BC. Today, it is the territory of the Jewish and Armenian quarters of the Old City.

During the height of development, Jerusalem was built on both on the western and eastern hills, between the Kidron Valley and the Valley of Hell (Guy Ben Inom) and up to the territories of today's Russian Compound.

After the destruction of the Second Temple and throughout the 19th century, Jerusalem’s boundaries remained within the ancient walls. Expansion beyond the historical limits occurred in the 1950’s due to the assistance of Jewish organizations, patrons of the arts and various European Christian missions.

A group of German protestants known as the Templars built a community during this period which was known as the German Colony. The modern city of Jerusalem began to develop rapidly. The Arab regions of East Jerusalem (Musrara, Sheikh Dzherah, and Wadi Joz) were also settled and developed.

Under the British Mandate, there was expansion to the west and undeveloped areas between the inhabited quarters were settled. This period was characterized by the British government's creation of a unified plan for the development of the city which included municipal laws aimed at preserving historical buildings. The plan also gave the city a consistent architectural appearance by cladding new structures with "Jerusalem stone", a light-colored limestone. 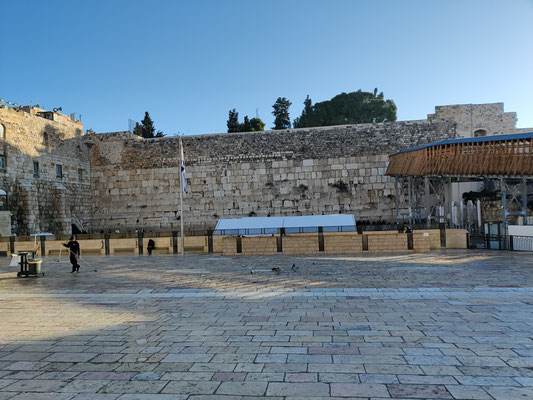 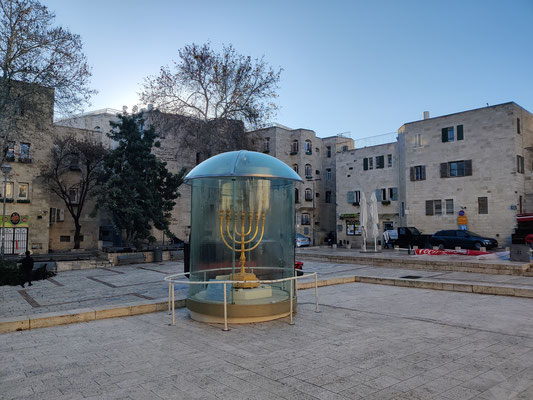 After the formation of the State of Israel in 1948, Jerusalem developed exclusively in the western region until 1967 because of the ceasefire line between the country of Jordan and Israel. This line divided East and West Jerusalem, including the Old City.

On December 5,1949, the Israeli government issued a statuary law regarding the status of Jerusalem and proclaimed it the capital of the state. The Israeli Parliament, known as The Knesset, was transferred from Tel Aviv.

After the hostilities of the Six Day War (June 5-10, 1967), Jerusalem was reunited into a single city once again and intensive construction began in the northern districts. During this period, the areas of the French Hill (A-Giva A-Tsarfatit), Ramat Eshkol and Givat A-Mivtar were built and populated.

Construction of modern residential areas started in 1971 in the Gilo, Ar Ha-Tsofim, Ramot, Talpiet Mizrah areas. Simultaneously, intensive excavations began at the Temple Mount the Jewish quarter of the Old City which was completely reconstructed. 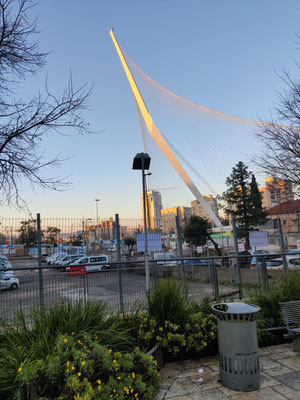 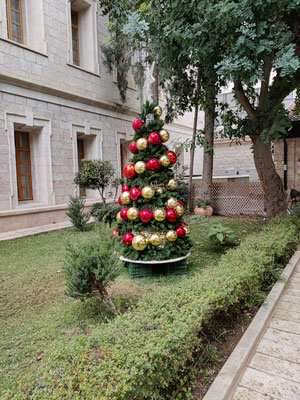 Jesus was apparently familiar with these words and  said, “Destroy this temple, and in three days I will raise it up” (John 2:19).

According to traditional evangelical belief, this is foretelling His own death and resurrection.


The tradition of pilgrimage to Jerusalem dates to Old Testament times. During the three main feasts of the Tabernacle, Passover and Pentecost, the children of Israel were to appear before the Lord in Jerusalem, as instructed in the book of Deuteronomy,


The Most High also provided instruction when He said,


The theme of Jerusalem as the sacred place for the people around the world continues in the book of Psalms. Out of 150 Psalms, 50 of them glorify Jerusalem. These Psalms are called songs of ascension, because prior to appearing before the face of the Lord, it was necessary to complete the ascent in a geographical as well as a spiritual sense.

"As the mountains surround Jerusalem,

So the Lord surrounds His people

Today, when you view the city of Jerusalem from the observation deck of the City of David Archaeological Park, the outlines of the built-up mountain peaks are clearly visible with the Mount of Olives to the east and Mount Zion to the north. The hill of Armon ha-Natsiv is visible in the south which was named in honor of the British government building located there.

In the post Temple era, pilgrimages remained an important custom. The Gospels record the visits of Jesus, His disciples and parents to Jerusalem during religious holidays. Compared with His hometown of Nazareth, Jesus did not perform many miracles in Jerusalem; just two healings were documented. Instead, He encountered disbelief of His own people and contempt from the religious leaders.

“His parents went to Jerusalem every year at the Feast of the Passover. And when He was twelve years old, they went up to Jerusalem according to the custom of the feast” (Luke 2:41-42).

“Now the Passover of the Jews was at hand, and Jesus went up to Jerusalem” (John 2:13).

“After this there was a feast of the Jews, and Jesus went up to Jerusalem”

Toward the end of Jesus’ earthly ministry, the Easter feast known as the Last Supper was secretly celebrated by Jesus and His disciples in the Upper Room because His life was in danger. Now it is one of the most visited holy places in Jerusalem,

“Then came the Day of Unleavened Bread when the Passover must be killed. And He sent Peter and John, saying, ‘Go and prepare the Passover for us, that we may eat’…’Then you shall say to the master of the house, ‘The Teacher says to you, Where is the guest room where I may eat the Passover with My disciples?’ Then he will show you a large, furnished upper room; there make ready. So they went and found it just as He had said to them, and they prepared the Passover” (Luke 22:7-11).

The death of Jesus on the cross, His Resurrection, Ascension, the promise of the Second Coming and the outpouring of the Holy Spirit onto the Disciples on the feast of Pentecost were events which took place in Jerusalem.

For millions of Christians of all denominations around the world, the Church of the Holy Sepulcher (also known as the Resurrection of Christ) is the most sacred place as the traditionally accepted site of the crucifixion on Golgotha, burial tomb and the place of Jesus’ resurrection.

The church was built in 335BC by order of the Emperor Constantine. In total, Jerusalem has more than 150 churches representing the entire spectrum of Christian denominations and over 1000 synagogues and religious schools. 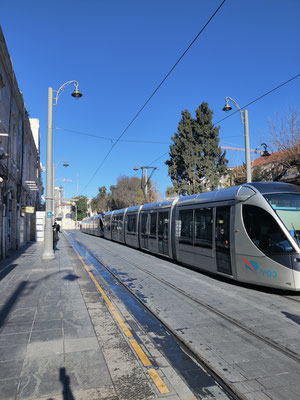 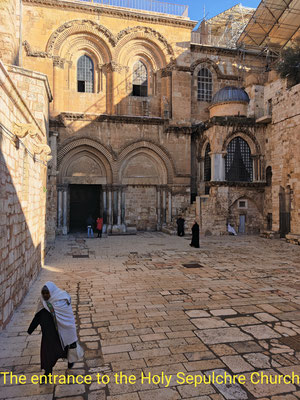 According to Jewish tradition, the most important holy places in Jerusalem are Temple Mount, The Western Wall, the tombs of King David and other kings of Israel, the cave of Shimon the Righteous, Mount of Olives and the Kidron Valley Cemetery.

It is He who assisted His servant Muhammad to make the journey from the Sacred Mosque (al-Masjid al-Haram) in Mecca to the“ remotest ”mosque (al- Masjid al-Aqsa) in Jerusalem, where we bestowed a blessed inheritance on the inhabitants of its surroundings, in order to show him through Our signs that God is one and He is Almighty.  Truly, Allah is One All-Hearing and All-Seeing!"         (Note: the word Jerusalem is absent in the original text).

According to this narrative, Muhammad ascended to heaven from the Temple Mount which was named Al Haram al Sharif and considered a sacred site. At this place, Solomon built the Temple to the Most High and where Jesus stood, a mosque was built by Caliph Omar, the first Islamic conqueror of Jerusalem.

A short distance away, another mosque, Al Masjid Al Aqsa, was built by Caliph Abd Al Malik and completed by his son Al Walid in 705 AD. The mosque was destroyed in 786AD due to an earthquake. It was restored but destroyed once again by another powerful earthquake in 1033 AD. Two years later, it was rebuilt by the Muslim ruler Ali Az-Zahir and it appears today as it did then. Al Aqsa Mosque is revered as the third shrine of Islam after Mecca and Medina.

According to the story from the Koran, Qubbat As-Sakhra Mosque (or Dome over the Rock), from which Muhammad ascended to heaven, was built between 687-691AD by architects Yarid Ben Salam and Raja Ben Hiva under the direction of Caliph Abd Al Malikom.

Islamic tradition also includes references to the city of Jerusalem,

"Whoever goes to worship from Mecca to the Far Mosque, may all sins be forgiven ...."

"Living in Jerusalem as one who fights in a holy war."

In accordance with the oral traditions of Muslims (Hadiths), the sacred stone Kaaba (building) will be transferred to Jerusalem from Mecca on the Day of Judgment. Today, there are more than 70 madrassas (Islamic religious schools) and mosques in Jerusalem. 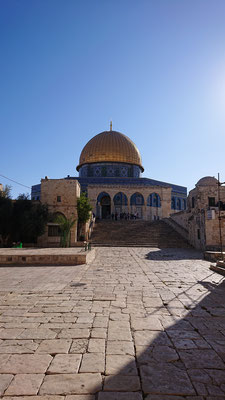 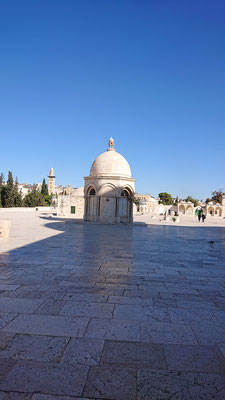 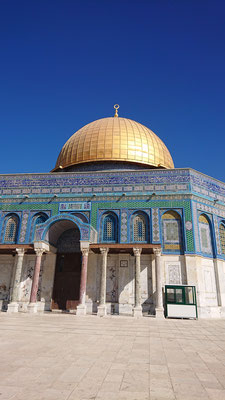