The Western Wall Tunnel is a narrow underground passage north of the holy site, The Western Wall (Wailing Wall or Kotel). The visible portion of the Western wall is only about only 200 ft (60 m) long and the remainder is located underneath the buildings in the Old City, mostly under the Moslem Quarter. Following the excavations in the 19th century, access was extended to the rest of the Wall, about 1591 ft (485 m).

From the time of King Solomon through the Hasmonean Period (10th to 1st century BC), the magnificent Temple rested upon a platform built on the peak of Mount Moriah (I Kings 6-7).

In 20 BC, construction was begun to enlarge the Temple and plaza was begun during the reign of King Herod the Great (37 to 4 BC). The Gospel of John (2:19-20) records the length of time to complete the work is documented:

"Jesus answered and said to them, “Destroy this temple, and in three days I will raise it up.”

Then the Jews said, “It has taken forty-six years to build this temple, and will You raise it up in three days?”

King Herod leveled the nearby northwestern hill and filled in parts of the surrounding valleys which doubled the size of the Temple Mount plaza. The Temple was raised, expanded and a white stone façade was applied. Gated walls were built around the plaza.

Retaining walls were built to provide stability and protection of the holy area. Today, the walls are a vivid remnant of the former glory of the Temple and serve as a focal point for millions of believers from all over the world.

Excavations of the Western Wall Tunnel

British army officers played a large role in the process of excavating the West Wall Tunnel in 1864 to 1870. Major General Sir Charles Wilson was a topographer who arrived in Jerusalem in 1864 to oversee the survey.

He created the first topographical map of the Old City which is still in use today and explored the region for clean water supplies.

Prior to Wilson’s expedition, a large arch was discovered (42 feet high / 12.8m) by Titus Tobler in 1845. This structure is believed to be a support for a bridge which connected the Temple Mount to the city. In his honor, the structure was named the Wilson Arch.

Captain of the British Army, Sir Charles Warren oversaw ongoing excavation from 1867 to 1870. He began digging at the Wilson Arch and found a series of underground tunnels. While exploring a water shaft under the Temple Mount, he discovered a gate which was named in his honor. A small synagogue was also found, apparently it was used by Jews until the Crusader conquest in 1099 and was called The Cave. Today, it is used as a women’s prayer room.

Following the 6 Day War (June 5-10, 1967), the Ministry of Religious Affairs continued to excavate for another 20 years. In 1996, Prime Minister Benjamin Netanyahu allowed the Jews to open the northern end of this Western Wall tunnel which opened onto Ummariya Madrasah, which is the street adjacent to the Via Dolorosa.

On September 24, 1996, a riot erupted because Moslems believed the Jews were attempting to lay claim to territory in the Moslem Quarter. Over a three-day period of unrest, fourteen people were killed. A wall was built across the north end of the tunnel which remains in place today.

In 1998, The Western Wall Heritage Foundation was organized and the tunnel was opened to the public.

master course of the western wall

In the Tunnel, there is a stunning example of “dry method” construction used during the Herodian period. This area is known as the Master Course (Nidbach Raba in Hebrew) and the huge boulders and chiseled edges are clearly visible. No materials such as mortar, cement, or wood were used to construct the massive wall.

The largest stone in the Master Course is called the Western Stone and is thought to be one of the heaviest objects lifted by human beings without the aid of powered machinery. The method of lifting and laying the stones one on top of the other remains obscure.

The huge stone is impressive at 45 feet long by 10 feet high and estimated width is of 11 feet. The weight is conservatively estimated at a massive 520 tons (1 M 146 K lb)!

The second stone is nearly 40 feet long and the the smallest is 6 feet long.

Altogether the Master Course is over 100 feet long and is composed of four stones.

Each stone has a square peg beacause it was plastered in a later period.

The purpose of this style may have been to provide a solid foundation for the Western wall and provide protection against earthquakes.

In the Narrow Passageway, there is a glass floor through which scattered stones can be seen where they lay after being hurled by the Romans during the destruction of the Temple.

A length of street from the Second Temple Period remains intact which started in the lower city, the City of David, and runs nearly the length of the tunnel. Construction was stopped probably during the Great Revolt and never completed. Nearby, there is a small quarry with prepared stones that were never used.

The Strouthion Pool was a reservoir which provided Jerusalem residents and pilgrims with drinking water. Although it is 53m long (175ft), it was the smallest pool in Jerusalem during the Second Temple period and was named after the small bird, the Strotiyon (in Greek). About one third of the pool can be seen under the Western Wall Tunnel with the remainder under the Sisters of Zion Monastery. 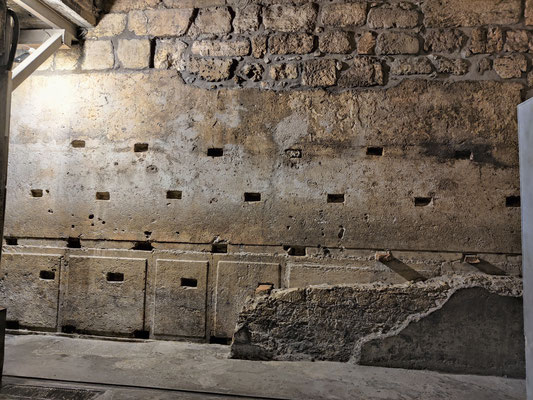 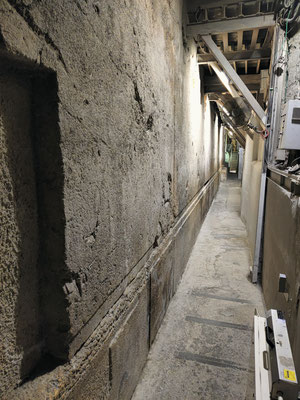 Most of Herodian stones have a typical marginal drafting which made it easier to place them together.

Because of the enormous weight of the stones there was no need to use cement to secure them.

Wilson’s Arch is part of a vault which was apparently built much later than supporting walls of the Temple Mount because the typical marginal dressing of the stones is nearly absent on except a few places.

The Strouthion Pool and Wilson’s Arch were separated by local residents of the Old City in 1866.

Wilson’s Arch, the vault and Strouthion Pool form a complex which is called the Great Bridge.

Scholars and archaeologists have different opinions about when these structures were built. The pier of The Great Bridge adjoins the Byzantine street which means it was built later than the street. In this area, coins were discovered from the Early Moslem period (7-9 AD).

The most likely conclusion is complex dates back to the Early Moslem-Arab period in the Land of Israel, although the northern section of the bridge rests upon the Second Temple period bridge.

herodian street and the end of the tunnel

This section of the tunnel is located beneath Madrasa Al-Manjakiyya (Moslem school) from the Mamluk Period (13th century AD).

The Herodian street is also located where Antonia Hill was quarried by Herod's workers (1st century BC to 1st century AD). It was named after Roman ruler Marc Antony.

Two columns stand on the pavement which are 9 feet (2.8m) tall and spaced 4.5 feet (1.4m) apart with Doric (Greek) style caps on the top. The columns were built in  separate pieces. On the second section of the column (right), handles were chiseled for lifting. It is rare to see this because usually they were ground off once the columns were finished.  Both the street and column construction was stopped abruptly, perhaps when zealots started a revolt.

Marginal drafting is visible on the paving stones which are different sizes.

Just in few hundred yards to the north, about 3 m (10 ft) above the level of Herodian street, the traditional Via Dolorosa (The Way of the Cross) is located. The 14 stations depict the last journey of Jesus from Antonia Fortress to Calvary; however, the actual street at the time of Christ is much lower than the current location of the Via Dolorosa.

Two stones were found lying in the street when it was excavated, no known function. The larger stone measures

It is obvious that the builders were intending to extend the street but it was never completed. Depth of the bedrock beneath the pavement is unknown.

The vertical cut in the stone was used to separate them into individual sections, also left unfinished.

At the end of Herodian Street, there is bedrock which was probably prepared to continue the street further north but never completed.

The stones were prepared by cutting slots then chisels were used to strike them which divided them horizontally.

The Hasmonean Aqueduct was discovered in 1985 after clearing debris at the northern end of the tunnel but its purpose was unknown.

Historical documents proved this is the same aqueduct discovered by Sir Charles Warren in the 19th century when he excavated through the basement of the nearby Sisters of Zion Convent.

Rain water was channeled to the Baris Fortress (Birah in Hebrew which means “capital”) which was located north of Temple Mount prior to King Herod’s expansion in 19BC.

This aqueduct was quarried out of bedrock for a length of 80 m (262 feet) and ended in the Strouthion Pool. The roof is formed by large stone slabs.

The northern part of the infamous Antonia Fortress where Jesus might have been tried (Gospel of John 19) and definitely the site of the beating of Apostle Paul:

"And as they went about to kill him, tidings came unto the chief captain of the band, that all Jerusalem was in an uproar. Who immediately took soldiers and centurions, and ran down unto them: and when they saw the chief captain and the soldiers, they left beating of Paul. Then the chief captain came near, and took him, and commanded him to be bound with two chains; and demanded who he was, and what he had done. And some cried one thing, some another, among the multitude: and when he could not know the certainty for the tumult, he commanded him to be carried into the castle."

The exit from the tunnel is opposite the Second Station of Via Dolorosa.