From the archaeological evidence, Capernaum was a relatively large city compared to the other villages along the Sea of Galilee situated on the trade route Via Maris which connected Mediterranean coastal cities with Damascus.  A garrison of the Roman army was stationed there along with tax collectors. One was named Matthew and he became Jesus' disciple (Matthew 9:9).

At the time of Jesus, fishing was the main industry in the region with seven piers located in Capernaum.

The town was likely inhabited since the 2nd century BC. Jewish historian Josephus Flavius refers to Capernaum where he stayed as a fertile spring. It was destroyed by a powerful earthquake in the 8th century AD then completely abandoned in the 11th century AD.

Miracles of Jesus in Capernaum

Jesus performed marvelous miracles throughout His earthly ministry, many of them in Capernaum which He felt would lead people to believe in His calling.

Healing of the paralytic man:

"And they brought to Him a paralytic lying on a bed. Seeing their faith, Jesus said to the paralytic, ‘Take courage, son; your sins are forgiven" (Matthew 9:2).

Healing of a woman with a bleeding disorder:

"And a woman who had been suffering from a hemorrhage for twelve years, came up behind Him and touched the fringe of His cloak; for she was saying to herself, ‘If I only touch His garment, I will get well’.  But Jesus turning and seeing her said, ‘Daughter, take courage; your faith has made you well’. At once the woman was made well" (Matthew 9:20-22).

"As Jesus went on from there, two blind men followed Him, crying out, “Have mercy on us, Son of David!” When He entered the house, the blind men came up to Him, and Jesus said to them, ‘Do you believe that I am able to do this?’ They said to Him, ‘Yes, Lord’.  Then He touched their eyes, saying, ‘it shall be done to you according to your faith’. And their eyes were opened" (Matthew 9:27-30).

Healing of a man with a crippled hand on the Sabbath:

"And He said to them, ‘Is it lawful to do good or to do harm on the Sabbath, to save a life or to kill?’ But they kept silent.  After looking around at them with anger, grieved at their hardness of heart, He said to the man, ‘Stretch out your hand’.  And he stretched it out, and his hand was restored” (Mark 3:4-6).

Healing of a man with leprosy:

"While He was in one of the cities, behold, there was a man covered with leprosy; and when he saw Jesus, he fell on his face and implored Him, saying, ‘Lord, if You are willing, You can make me clean’.  And He stretched out His hand and touched him, saying, ‘I am willing; be cleansed’.  And immediately the leprosy left him” (Luke 5:12-13).

Healing of a demon-possessed man:

"As they were going out, a mute, demon-possessed man was brought to Him.  After the demon was cast out, the mute man spoke; and the crowds were amazed, and were saying, ‘Nothing like this has ever been seen in Israel’”

Healing of the servant of a Roman centurion. Jesus was surprised by the simple faith of this heathen. The Gospel of Luke informs us that town's synagogue was built by this man.

"And a centurion’s slave, who was highly regarded by him, was sick and about to die. When he heard about Jesus, he sent some Jewish elders asking Him to come and save the life of his slave. When they came to Jesus, they earnestly implored Him, saying, ‘He is worthy for You to grant this to him; for he loves our nation and it was he who built us our synagogue’.  Now Jesus started on His way with them; and when He was not far from the house, the centurion sent friends, saying to Him, ‘Lord, do not trouble Yourself further, for I am not worthy for You to come under my roof; for this reason I did not even consider myself worthy to come to You, but just say the word, and my servant will be healed. For I also am a man placed under authority, with soldiers under me; and I say to this one, ‘Go!’ and he goes, and to another, ‘Come!’ and he comes, and to my slave, ‘Do this!’ and he does it’”. Now when Jesus heard this, He marveled at him, and turned and said to the crowd that was following Him, ‘I say to you, not even in Israel have I found such great faith’.  When those who had been sent returned to the house, they found the slave in good health" (Luke 7:1-10).

Perhaps one of the most widely known miracles Jesus performed in Capernaum was the healing of the mother-in-law of his disciple, Peter. Afterwards, Jesus stayed in her home.

"And immediately after they came out of the synagogue, they came into the house of Simon and Andrew, with James and John. Now Simon’s mother-in-law was lying sick with a fever; and immediately they spoke to Jesus about her. And He came to her and raised her up, taking her by the hand, and the fever left her, and she waited on them” (Mark 1:29-31).

The etymology of the name Capernaum was possibly derived from the phrase "village of Nahum" (Kfar means village in Hebrew). Population of this town in Jesus' time was around 1500.

The word Centurion was perhaps created from centum (meaning 100), but this interpretation is widely disputed and disregarded and more likely simply means tribe.

According to all four Gospels, Jesus chose to live in Capernaum after leaving Nazareth (Matthew 4:12-17).

The Gospel of Matthew documents Jesus’ residence in Capernaum after He left Nazareth, an event which fulfilled prophecy foretold by Isaiah:

"Getting into a boat, Jesus crossed over the sea and came to His own city" (Matthew 9:1). 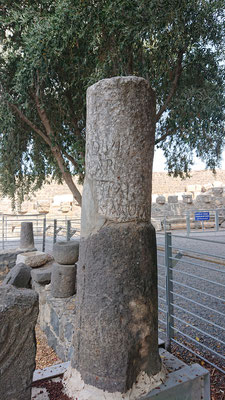 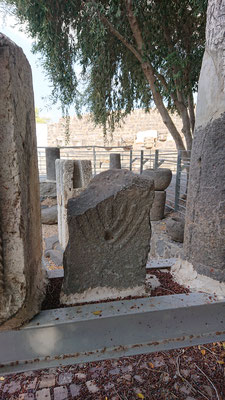 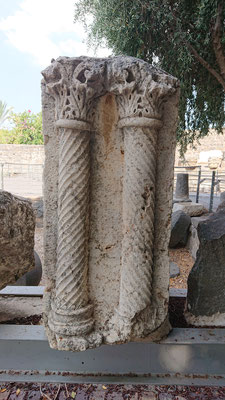 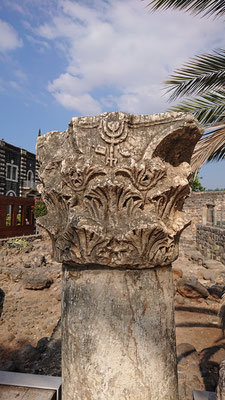 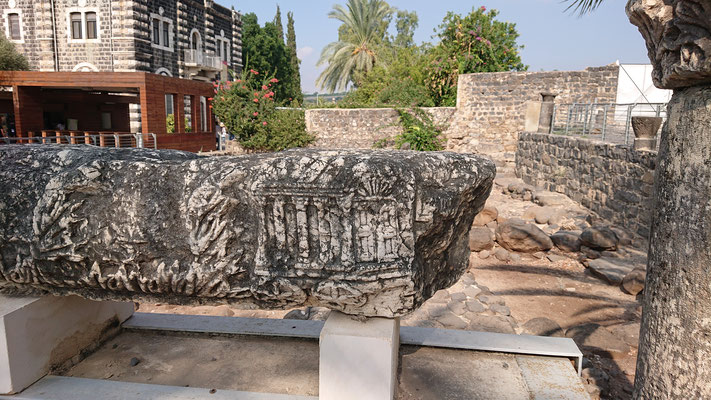 Releif of Seven branched candle stick on the Greek Corinthian Capital, Incription with the name of a grandson of Zebedee, the movable arch of the Covenant releif.

• 1900 (around) - Around the ruins, a fence was raised and palm and eucalyptus trees (from Australia) were planted as an oasis for Pilgrims. A harbor was also built. These extensive projects were undertaken by the Franciscan monks, directed by the famous explorer Virgilio Corbo of the  same Order.

• 1921 to 1926 – Franciscan friar and archaeologist Gaudenzio Orfali excavated the site of the synagogue which he suggested was from the first century AD. It was restored it to the height of the first floor when work on the site was abruptly halted due to the death of Fr. Orfali in a traffic accident.

• 1960 to 1970s – Fr. Virgilio Corbo and the Franciscan Order continued excavation of the site.

• 1968 - Italian Franciscan friar and archaeologist Stanislao Loffreda discovered the ruins which are believed to be the home of St. Peter's house!

Synagogues appeared long before the destruction of the Temple in Jerusalem.

In fact, some historians assume that they already existed in the First Temple period (1000–586 BC), an opinion supported by the presence of ruins from the excavations in the City of David. 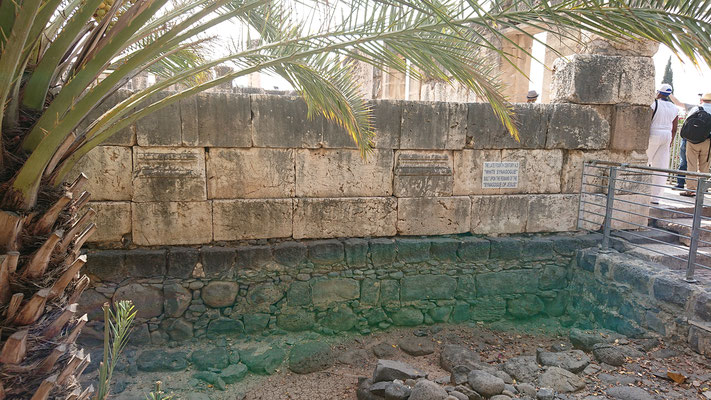 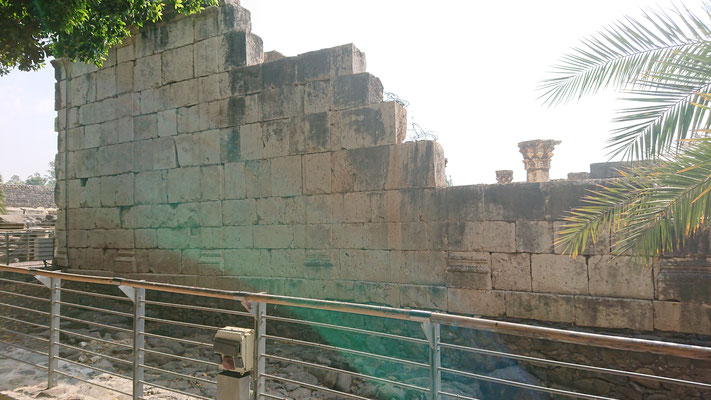 This is the largest synagogue discovered in the Galilee region.

There is an obvious visual contrast between the synagogue and other ancient ruins of the city. The synagogue was built primarily of light limestone upon a black basalt stone foundation, while the rest of the structures were built entirely of black basalt commonly found in the area. Although there are many theories about the use of different types of stone, there is no clear consensus.

The scholars estimate that the synagogue was built between the 3rd and 5th centuries AD and obviously not from the time of Jesus. Most experts say these are the remains of the former, perhaps, 1st century house of prayer possibly damaged by the Dead Sea earthquake in 31AD then replaced by a new larger synagogue.

Quite possibly, it may have been a synagogue which was dismantled in the Upper Galilee region where white limestone is common and transported to Capernaum and reassembled on a black basalt foundation. Harsh laws of the Byzantine Christian Empire did not allow the Jews to build new synagogues; therefore, to avoid violation of this law, the old synagogue was likely transferred to the city from another location.

The House of St. Peter 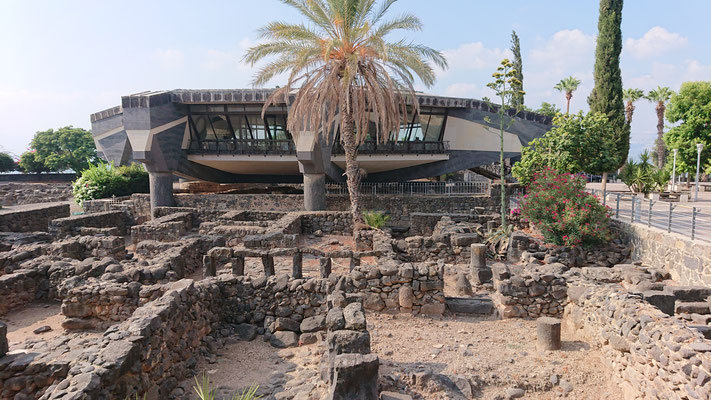 The Franciscan modern church on top of the excavated St. Peter's house

A few decades ago, Italian archaeologists discovered remains of a modest house from the early Roman period (first centuries AD) underneath the ruins of the latter Byzantine octagonal ( eight angle) church in Capernaum.

It was larger than other discovered houses, but simple with coarse stone walls and a roof of earth and straw. The house consisted of a few small rooms built around two open courtyards. For many Christians, it was one of the most exciting finds. Because the house had early Judeo-Christian graffiti and the church was built at the site in the Byzantine period, the place was considered to be exceptional; probably the house of Peter's mother-in-law  which Jesus used as His home base during the time of His ministry.

The current modern Franciscan Catholic church was completed in 1990 and is built on top of the previous Byzantine churches and the house from the first century ruins.