The United Nations Educational, Scientific and Cultural Organization (UNESCO) chose Tel Megiddo and put it on the list of World Heritage sites of outstanding universal value.

Armageddon: the Place of the Battle Between Forces of Light and Darkness 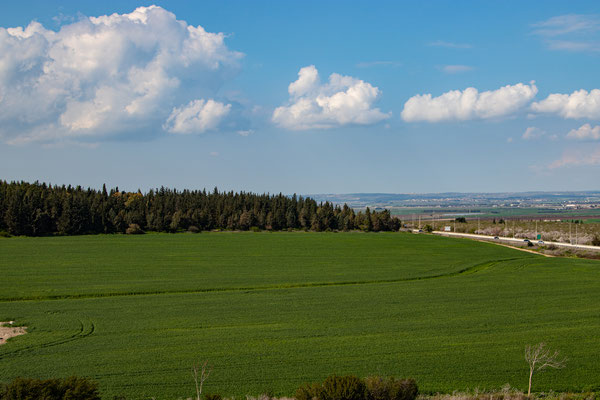 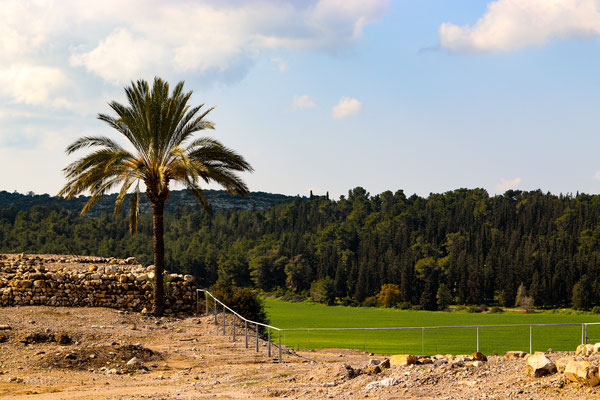 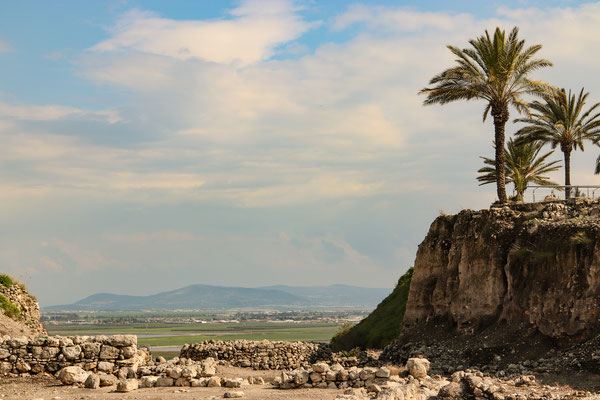 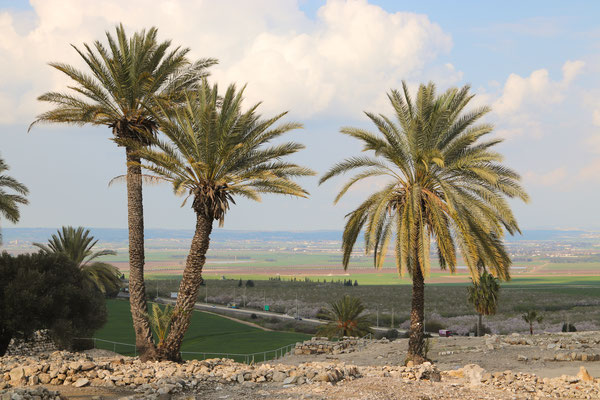 The Jezreel Valley is surrounded by the mountains and is situated at the height of almost 1000 feet above the sea level and perhaps the valley described in the prophetic vision of Zachariah:

“For the mountain valley will reach to Azal, yes you shall flee as you fled from the earthquake in the days of Uzziah king of Judah. Then the Lord my God will come and all the saints with Him” (Zechariah 14:5).

The valley has been the site of battles from ancient times to the 20th century. Egyptians (then Canaanites), Israelites, Midianites, Amalekites, Philistines, Hasmoneans, Greeks, Romans, Arabs, Mongols, French, Turks and British have all fought and died here in their conquest to obtain control of the land.

The names of the warring leaders who have battled in this small valley reverberate throughout history. Here, in 1479 BC, Pharaoh Thutmose III fought the first recorded battle in history. Deborah, Barak and Sisera (Judges 4:5) and Gideon also fought upon this ground. Saul and his son Jonathan fell in the fight on the slopes of Mount Gilboa (1 Samuel 28, 1 Chronicles 10). King Josiah fought here against Pharaoh Necho in 609 BC:

“So he came to fight in the valley of Megiddo. And the archers shot King Josiah; and the King said to his servants, 'take me away for I am severely wounded’” (2 Chronicles 35:22).

King Ahaziah died at the hands of Yehu:

“But when Ahaziah, King of Judah, saw this, he fled by the road to Beth Haggan. So Yehu pursued him and said: 'Shoot him also in the chariot.' And they shot him at the ascent of Gur, which is Ibleam. Then he fled to Megiddo and died there” (2 Kings 9:27).

Pharaoh Sheshonq I (known as Pharaoh Shishak in the Bible), fought here as well as Israeli Kings Jehu and Joram and Queen Jezebel.  In more recent times, the famous army generals Saladin and Napoleon commanded their troops on this battlefield. Great Britain’s Field Marshall Allenby fought in this famous valley, as recently as 1918. It was not by chance the evangelist John chose this comparatively small area for his vision of the End Times:

“And they gathered them together to the place called in Hebrew Armageddon” (Revelation 16:16). 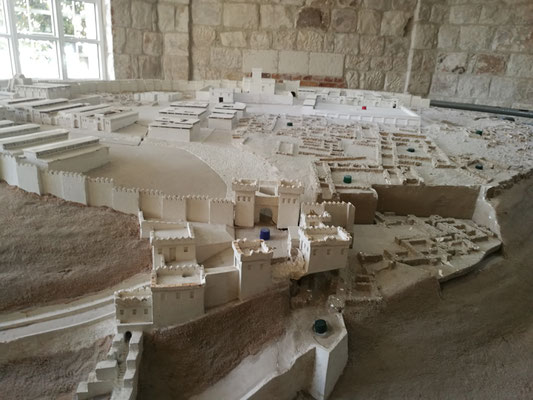 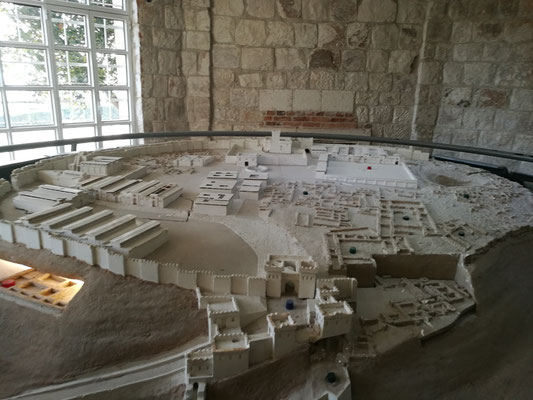 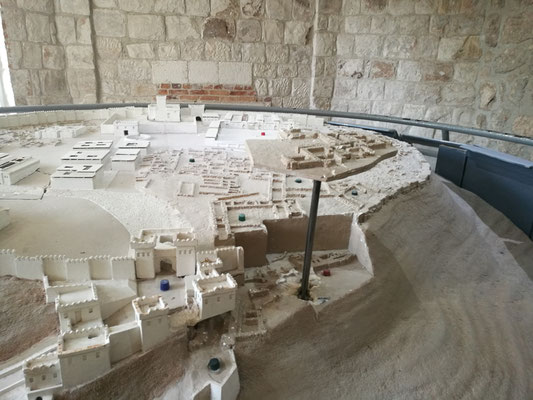 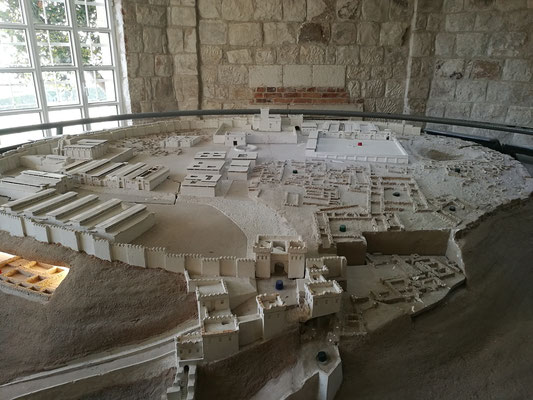 The name, Armageddon, is most likely a corruption of two Hebrew words: 'Har' (mountain, hill) and Megiddo. The Hebrew Holy Scripture tells us that Megiddo had been fortified by the great builder Solomon right after he was crowned King of Israel.

“And this is the reason of the levy King Solomon raised, to build the house of the Lord and his own house, and Milo, and the wall of Jerusalem, and Hazor, and Megiddo and Gezer” (1 Kings 9:15).

During excavations, the archaeologists discovered the remains of 26 cities in the 25 acres territory! Remains of a retaining wall prove evidence of human settlement at the site by Canaanites in the Neolithic period, 6th millennium BC. This region was vitally important during ancient times because a large trade route called Via Maris (in Latin) ran along the Sea of Galilee and through a number of cities. The route was also called the Way of the Sea.

Another sensational discovery in Megiddo was a 4ft (1.5m) high circular structure that served as a Canaanite sacrificial altar, most likely dedicated to their deity, Baal. In the ancient world, altars played a key role in the religious practices of many nations. Any surface consecrated for the purpose of making sacred offerings would have been considered an altar.

An ancient seaport city in Syria called Ugarit was excavated in 1928 and tablets were found from around 1200 BC which shed light on the pantheon of Canaanite gods. The highest deity was god El, the father god of all the Canaanite gods and men, also the creator deity. It is interesting that the same word for god in the ancient writings is identical in Hebrew. The goddess Athirat (wife of El), is known in the Holy Scripture as Asherah. The important god of storm and thunder, Baal, (probably the grandson of El), defeated Yam, the god of the sea, and Mot, the god of death.

It is clear from the Holy Scripture that the ancient Israelites were often drawn to worship local gods, including Baal and Asherah. In some cases, they worshiped foreign deities instead of the God of Israel. At times, the people combined their worship to include Baal and the God of Israel which is maybe way the prophet had to ask:

Later, three temples were built in Megiddo during different periods. In 2000 BC, the city was totally abandoned but the reason is unclear. For two hundred years people did not settle in the region but in the Middle Bronze Age, the city was rebuilt and it prospered under the Egyptian influence.

Egypt was a strong power in the ancient world and Israel's prophets warned the people not to put their trust in protection of Egypt. The book of Isaiah says:

“You are depending on Egypt, that splintered reed of a staff, which pierces the hand of anyone who leans on it! Such is Pharaoh king of Egypt to all who depend on him”  (Isaiah 36:6).

During the Canaanite period in the Land, Egypt managed to control their city states by swift punishment of rebels. The walls of the temple to god Amun in the Egyptian city Karnak recorded the story of the first battle in history which occurred in the year 1479 BC when Pharaoh Thutmose III fought to reestablish his dominion over Megiddo.

The inscription tells us about the discussion between the Pharaoh and his generals and the planned routes for their army. The generals suggested a broad entrance through the valley while the Pharaoh insisted upon using a narrow corridor to approach the city unnoticed. The inscription records the army chiefs as saying:

"How is it possible to march upon this road, that becomes narrower?...Shall our vanguard be fighting, while the rearguard is yet standing?"

Of course, the will of the Pharaoh prevailed and he managed to surprise the residents of Megiddo by the sudden attack but the soldiers of Thutmose saw the abandoned villages and rushed to pillage them. Thus, the conquest of the city was delayed for a few months.

In the 14th century BC Megiddo became a cultural and political giant of the whole region. It had a strategic setting and the beneficial location right on the ancient trade route (Via Maris or Way of the Sea) which connected two empires: Mesopotamia and Egypt. Located in the Fertile Crescent, these cities were important areas of trade. The trade route was mentioned in the Old Testament,

The importance of the trade route likely explains the reason Solomon fortified “Hazor, Megiddo and Gezer" (1 Kings 9:15) - all three are in this area.

Another written document found in the Egyptian city El Amarna tells us about Megiddo's King Biridiya begging for help of the Pharaoh Amenhotep IV:

"Know, oh king... Labaya, king of Shechem has acted aggressively against me... Protect your city, so that Labaya will not conquer it in death, pestilence and burning.'"

Pharaoh Shishak completely destroyed Megiddo in the 10th century BC:

In 732 BC the city fell to the mighty Assyrian army led by Tiglath Pileser. 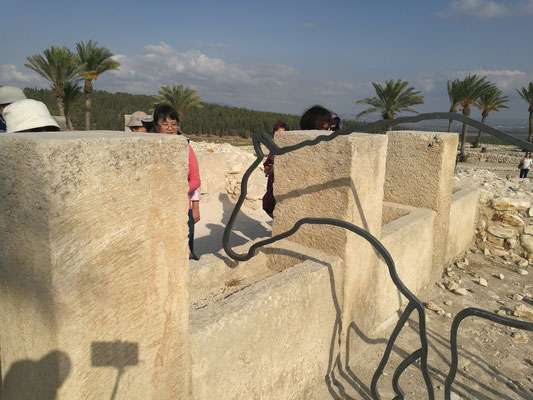 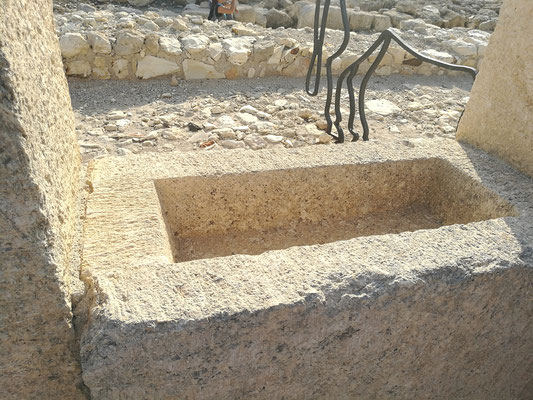 The stables and the stone ( not wooden) manger

There was discovered a large pit, today it has 183 stairs down and continued by the 70 m (230 ft) horizontal tunnel that leads to the water spring. The city only water source was located outside the city walls and this was a weak point it he city defense system. So the genius solution was found  was found to camouflage the spring on the outside  by the stones and to dig a tunnel from the inside that will lead to the spring. 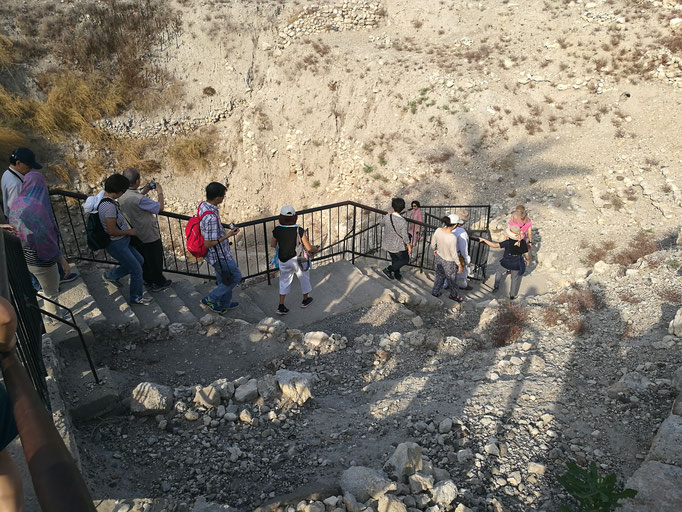 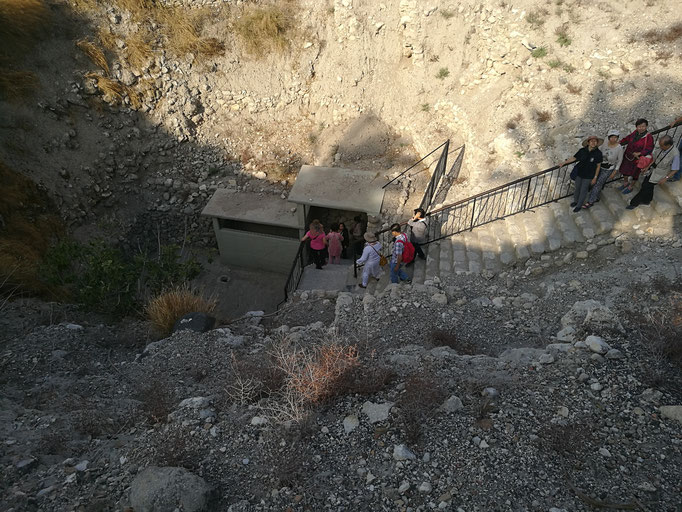 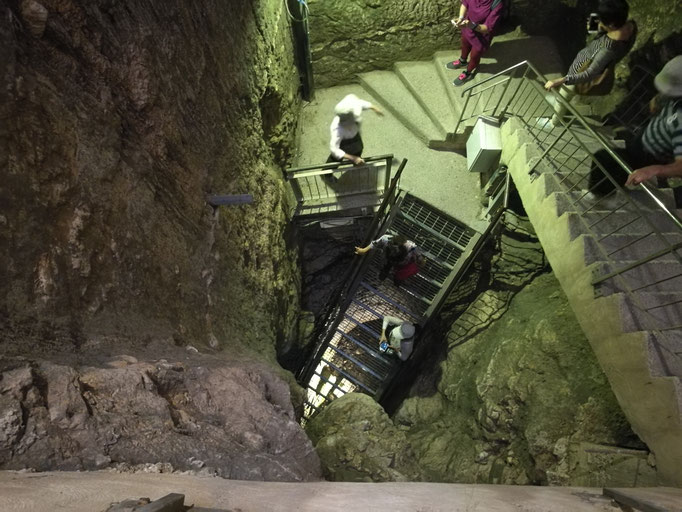 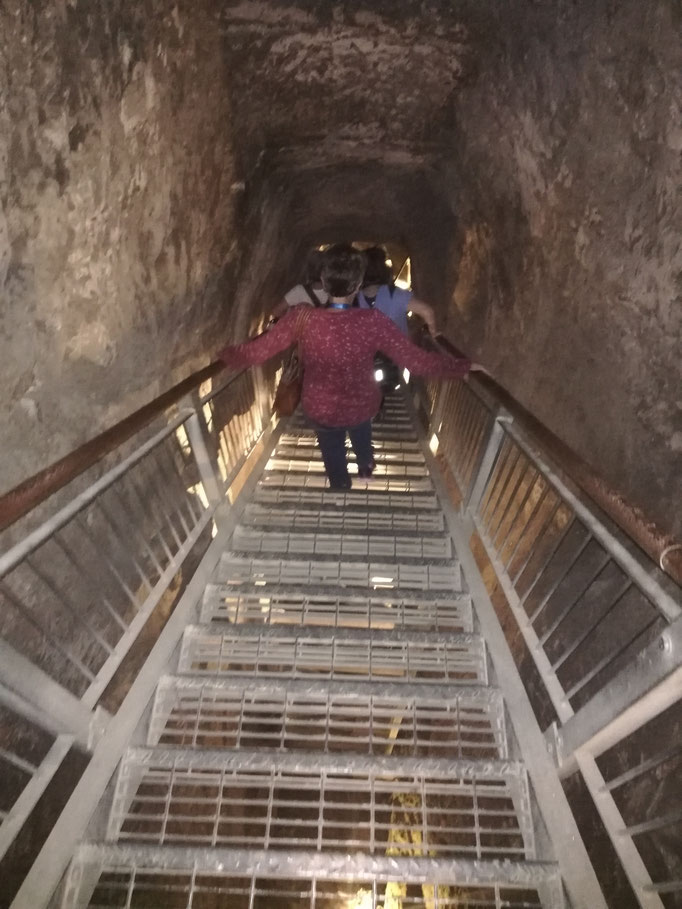 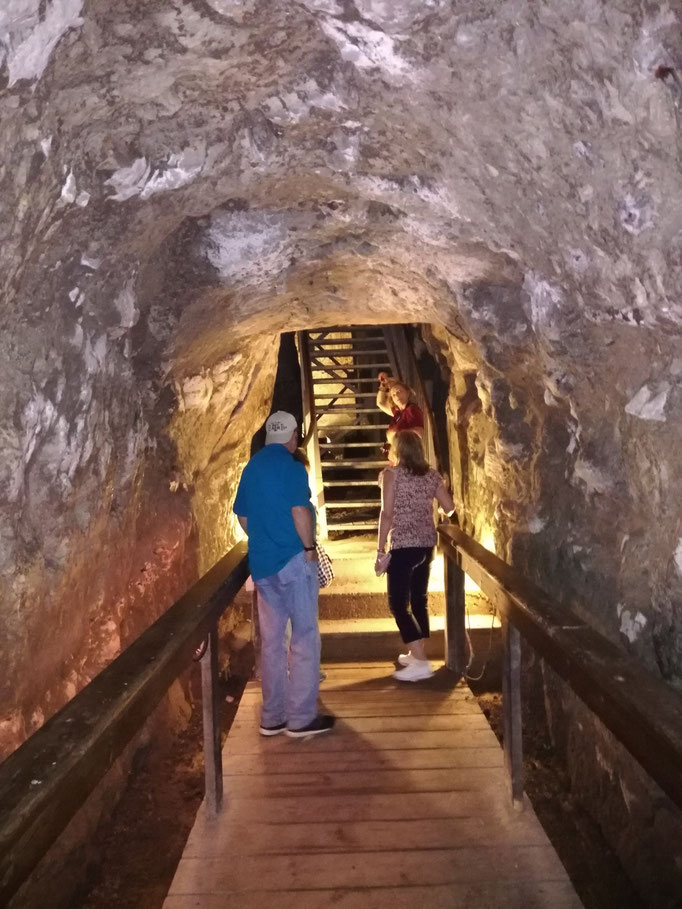 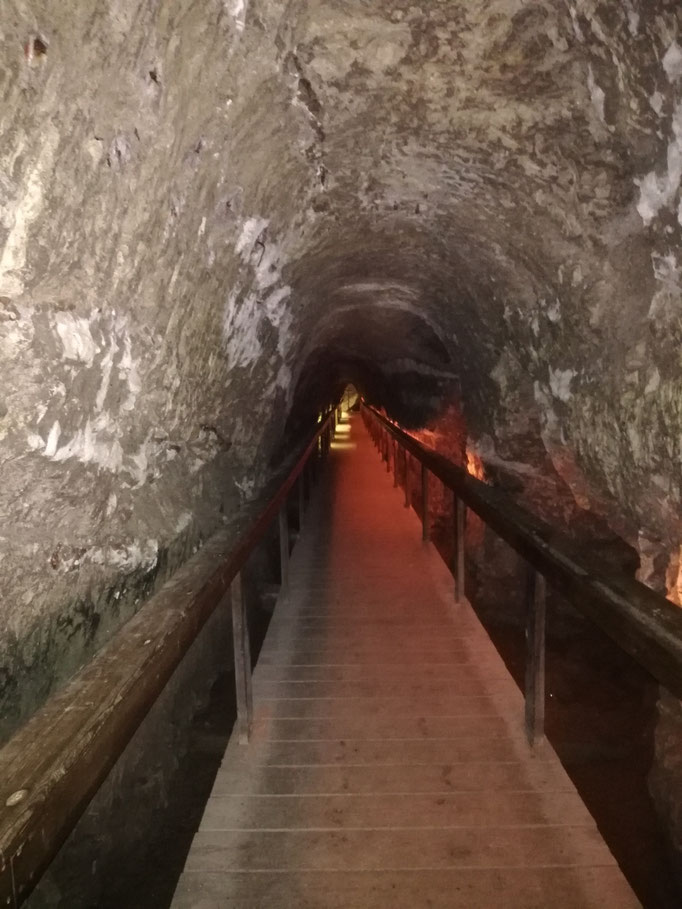 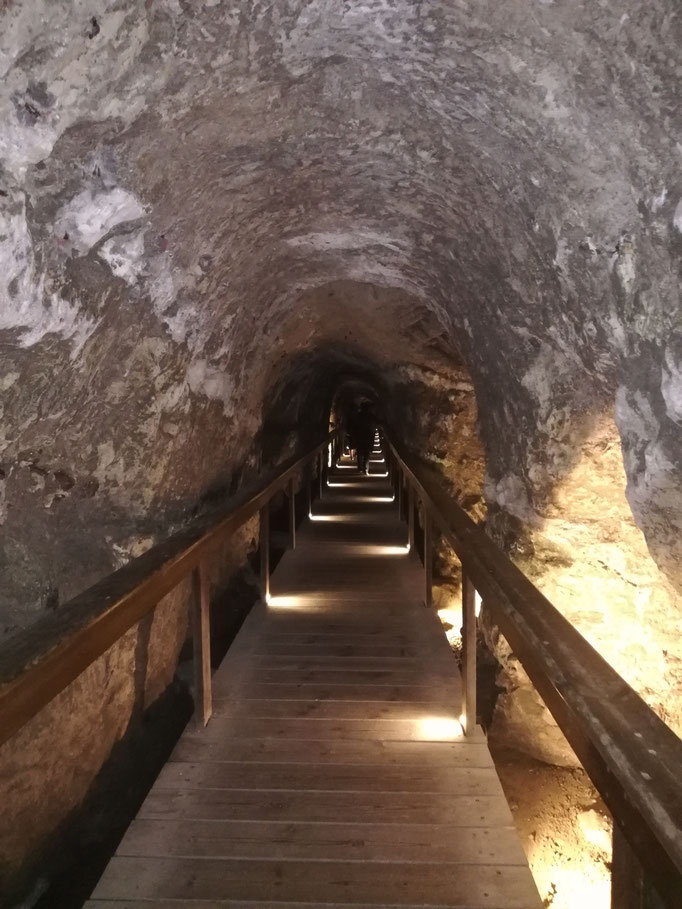 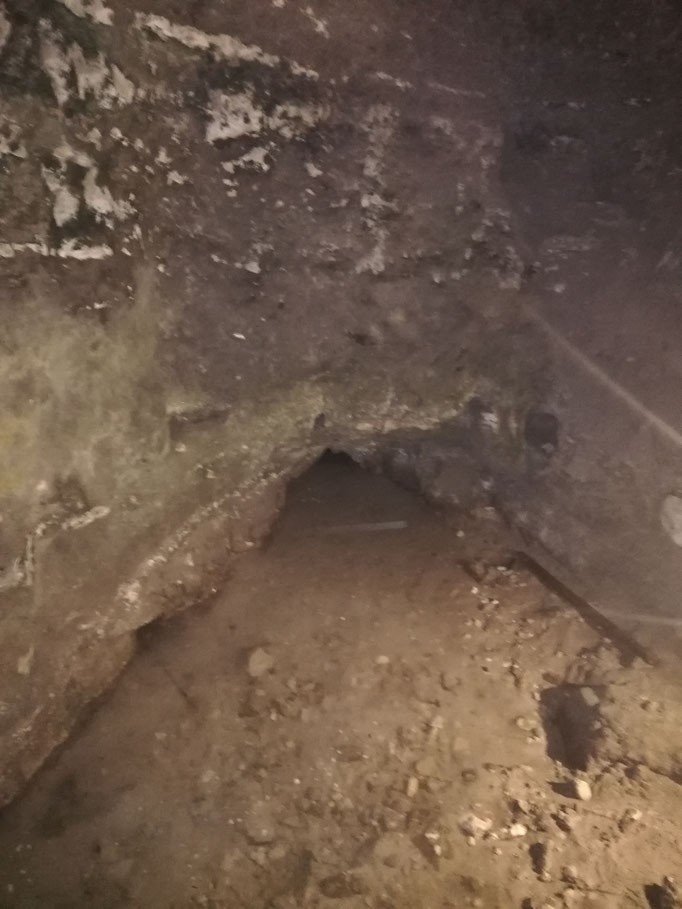 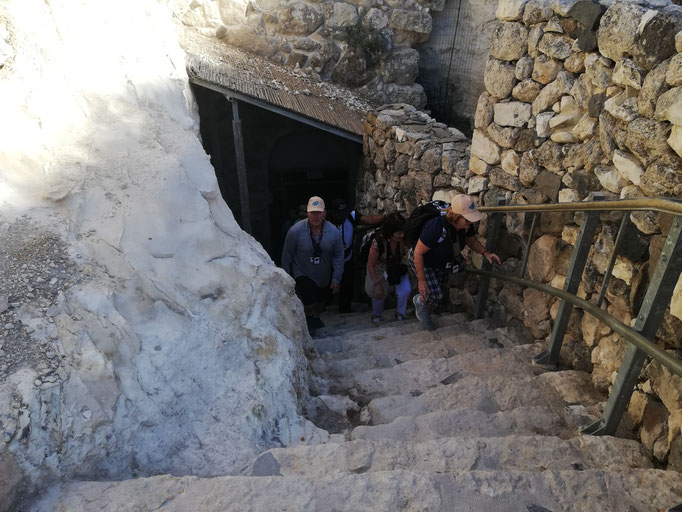 It is a real adventure and fun to descend into this tunnel. It feels like going back in time.

And at the exit from the tunnel, by the gate, the tourist bus will wait the visitors.