In the Hula Valley, human settlement has been sparse through history until the 19th century when a Arab Bedouin tribe settled in the region, making their living by breeding buffaloes (jammus in Hebrew) and selling hand woven papyrus mats.

In 1883, a moshav (a cooperative agricultural settlement), Yesud ha-Maala, was founded on the shore of Lake Hula.  Nearby, a kibbutz (communal farm) was established and named Khulata, in 1936. This commercial fishing community was possible due to the eradication of malaria by the scientific work of Professor Gideon Mera during the British Mandate. The professor’s research of mosquitos in the nearby settlement of Rosh Pina led to development of methods of control.

Despite this, after the creation of the State of Israel, the decision was made to drain the lake and marshes and use the bare, fertile land for agriculture. Drainage works began in 1951 and drew opposition from activists and environmentalists concerned about the unique flora and fauna of the Hula Valley.

Concern for the environment led to the creation of the Society for the Conservation of Nature in 1953, as well as the decision to set aside 4.5 sq km (1111 acres) for a nature reserve, the first of its kind in Israel. In 1957, water was pumped out of the lake and marshes (except for the area of the reserve surrounded by an earth embankment), and most of the land in the valley was prepared for agricultural needs. Initially, the reserve was managed by the Jewish National Fund, but in 1964, the Department of Nature Reserves was created and Hula Valley was declared the first reserve in Israel.

Before Lake Hula was drained, it covered an area of 14 km (3460 acres) with an additional 30 km (mostly north of the lake) of vast peat bogs created by organic material that had sunk and rotted over the centuries. Once Lake Hula was drained, serious environmental problems arose, including increased pollutants from the Hula Valley which drained into the Sea of Galilee. This was a serious issue because the Sea of Galilee was the main source of water following the construction of the National Water Carrier which can carry as much as 72,000 cubic meters (19,000,000 gallons) of water each hour, totaling 1.7 million cubic meters in a day. Spontaneous combustion of peat was also an issue.

Due to the exploitation of natural springs (especially from Nahal Enan) and the residue of contaminations of fishponds in the Hula Valley, there has been a serious decline in water quality, causing harsh conditions for the diverse species of invertebrates and fish in the reserve  to the extent that some ecologists refer to it as "the Hula Desert", although the diversity of waterfowl in the region remained significant.

In 1995, Small Lake Hula (Agamon HaHula) was excavated, a project for the ecological rehabilitation of damaged areas in the heart of the Hula Valley. The reserve and Small Lake are areas of runoff which have absorbed large quantities of nitrates and phosphates, preventing them from entering the Sea of Galilee. The fundamental difference between Hula Reserve and Small Lake Hula is that the reserve consists mainly of chalky soil while Small Lake is based on peat. In 2004, the earthen banks surrounding the reserve were reinforced and significantly improved its function.

Hula Nature Reserve is located on a worldwide bird migration route, making it an important site for waterfowl. Every year 500 million birds including 390 species migrate to winter quarters from Europe to Africa. Large numbers of birds land at the Hula Reserve enroute to their final destination for the winter. What a wonderful example for the Jewish diaspora and religious pilgrims seeking to visit the holy places in the Land of Israel! Year after year, the birds faithfully arrive for rest and nourishment while they establish their winter residence or proceed on their journey further south.

The area is especially famous for both migratory and wintering birds, the most famous of which are rare black storks, swans, cranes, herons and pelicans. Many of these winter here and waterfowl nests have been recorded in the reserve, including five species of herons. Even during the years when Hula suffered from poor water quality, it remained a major attraction for both migratory and wintering birds, attributed in part to the drying up of water and wetlands in neighboring Turkey, Syria and Lebanon.

There are many other bird species here, such as the pygmy cormorant (Phalacrocorax pygmeus), the glossy ibis (Plegadis falcinellus) and the common tern (Sterna hirundo). Some of these species are endangered both in Israel and throughout the world, including the marble teal which has a regular nesting site here, as well as other rare species such as the little bittern and the Western yellow wagtail (Motacilla flava).

The Hula Reserve is also home to many mammals such as wild boars, otters and nutria (also known as coypu, a large semiaquatic rodent). If you are lucky, you may catch a glimpse of the marsh lynx, a rare species in the region.

Also worth mentioning are the insectivorous bats which are large brown bats who live in large numbers in the Reserve.

In the Reserve lives a large herd of water buffalo, it is the largest number of this kind of animals in the land of Israel and even a small herd of Persian fallow deer. 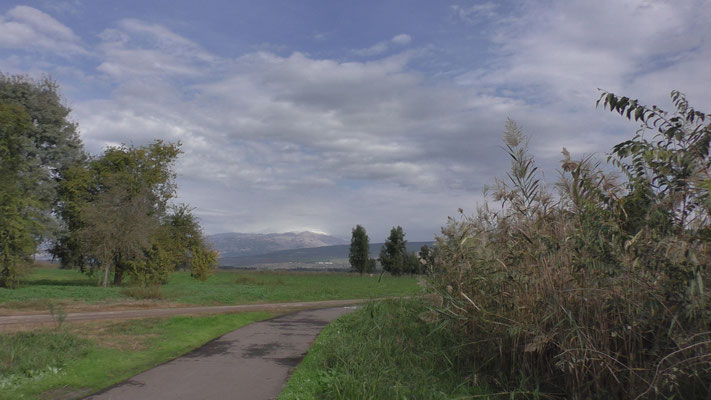 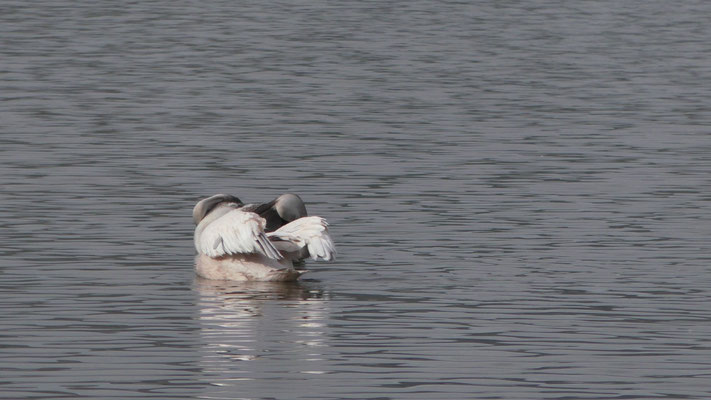 Thousands of Common cranes migrant through Agamon Hula Valley in Israel. they used to raid farmland and cause significant damage to agriculture in the region. The Crane Project in the Hula Valley protect the cranes and farmland using daily Feeding in the Agamon Hula Nature reserve and controlling their food source.