The ancient city of Beth Shan had an enviable location in the Jordan valley built on a rise between the streams of Nahal Harod and Nahal Asi. The region’s rich soil and abundant water supply attracted human settlements since the Neolithic period about 7000 years ago.

The strategic location provided a route between northern coast of Israel and Transjordan region in northern Canaan. From the sixteenth to the twelfth centuries BC, the cith was under Egyptian rule. In the Old Testament,  Beth Shan was in the region of the tribe of Manasseh which was unable to secure it,

The city is also the location of the battle with the Philistines on Mount Gilboa where Saul and his three sons fought and were killed.

''Now when the inhabitants of Jabesh Gilead heard what the Philistines had done to Saul, all the valiant men arose and traveled all night, and took the body of Saul and the bodies of his sons from the wall of Beth Shan; and they came to Jabesh and burned them there. Then they took their bones and buried them under the tamarisk tree at Jabesh and fasted seven days” (1 Samuel 31:8-10).

''And when all Jabesh Gilead heard all that the Philistines had done to Saul, all the valiant men arose and took the body of Saul and the bodies of his sons; and they brought them to Jabesh, and buried their bones under the tamarisk tree at Jabesh, and fasted seven days” (1 Chronicles 10:11-13).

There is no archaeological evidence of Philistine inhabitation, but it is known that the city was ruled by an Israelite governor during King Solomon’s reign (I Kings 4:12). Following the Assyrian conquest, it ceased to exist. After the conquest of Alexander the Great,  Beth Shan was given a status of Polis (city in Greek) but  there is little archaeological evidence from the Greek period.

Beth Shan was incorporated into the Decapolis (a union of ten cities in the first century) and renamed Scytopolis (or Nysa-Scytopolis).  According to the account by ancient historian Pliny the Elder, Beth Shan was established by the god of wine Dionysus and the Scythians. Here he buried his nurse Nysa.  Several statues of Dionysus were discovered during the excavations.

The Hasmonean Jewish conquerors restored the city’s Biblical name of Beth Shan dating from  104 BC.  After the Roman conquest in 63 BC, control of the city returned to the non-Jews and the name reverted  back to Scytopolis.  The city began to prosper during the reign of emperor Hadrian in the second century AD and then under Marcus Aurelius. Temples, bathhouses, theaters were built and both Jewish, Samaritan and non-Jewish populations prospered during this period.

The lifestyle and architecture of the city changed with the beginning of the Christian period in the fourth century. Emperor Theodosius divided the Land of Israel into provinces and Scytopolis became a capital of the Palaestina - Secunda region.  The population was nearly 50,000 residents. Following the Moslem conquest of 638 AD, the city declined. Crusaders restored the Christian Kingdom from 1099 to 1262 until the Mamelukes expelled them in 1263.

In 1949,  a new city was established by the Israeli government and the territory of this ancient city was proclaimed a National Park.

The relief of Dionysis carved from marble on one of the capital. Dionysis, God of wine was  proclaimed a patron of Beth Shan. 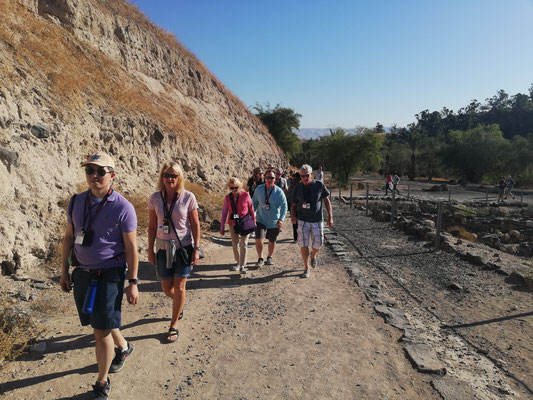 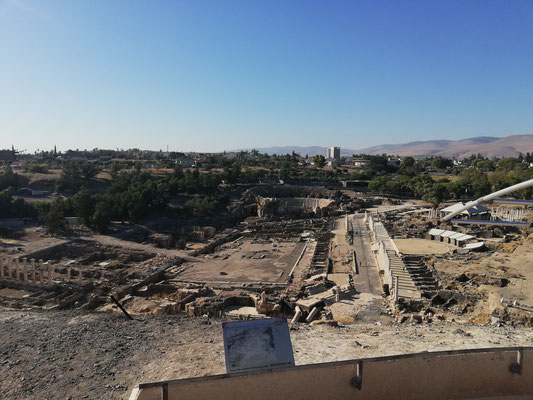 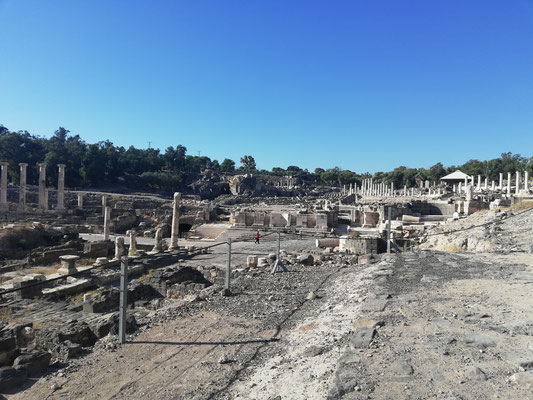 The largest Roman theater in the Land of Israel, seats 7,000.

In the hot room (caldarium) of the large public bath house, the clay pillars (hypocaust) allowed hot air to penetrate into the empty space, underneath the floor and heated the floor and gradually the whole room.

The central colonnaded street was named after one of the important citizens, a lawyer named Silvanus, according to an ancient Greek inscription.

Mosaic of the goddess Tyche, found in the market. 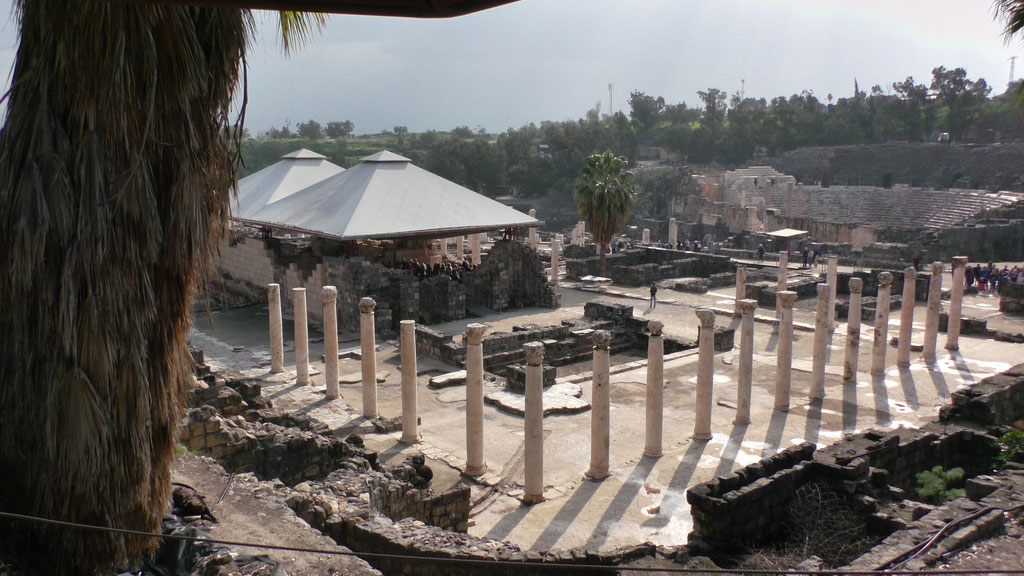 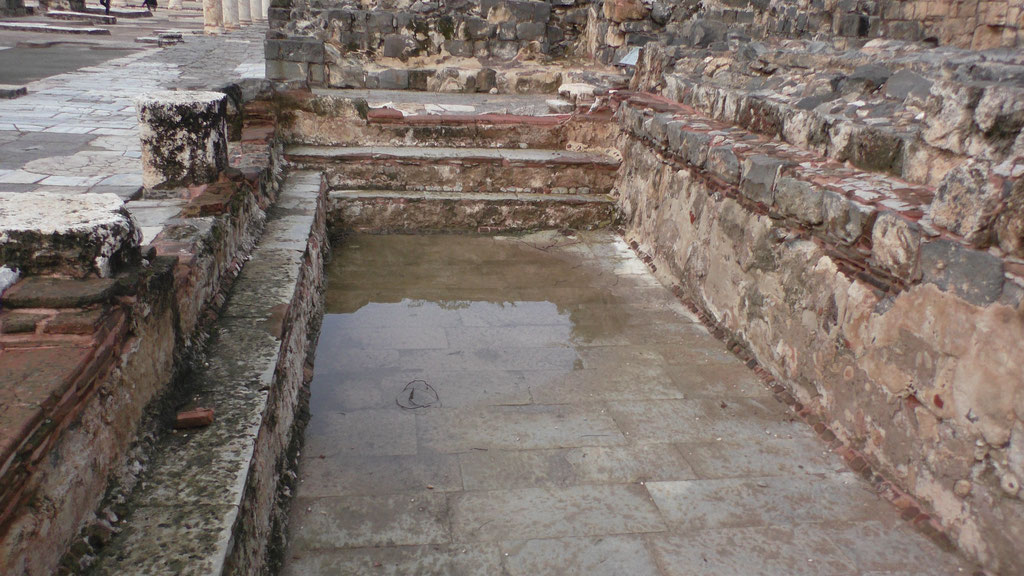 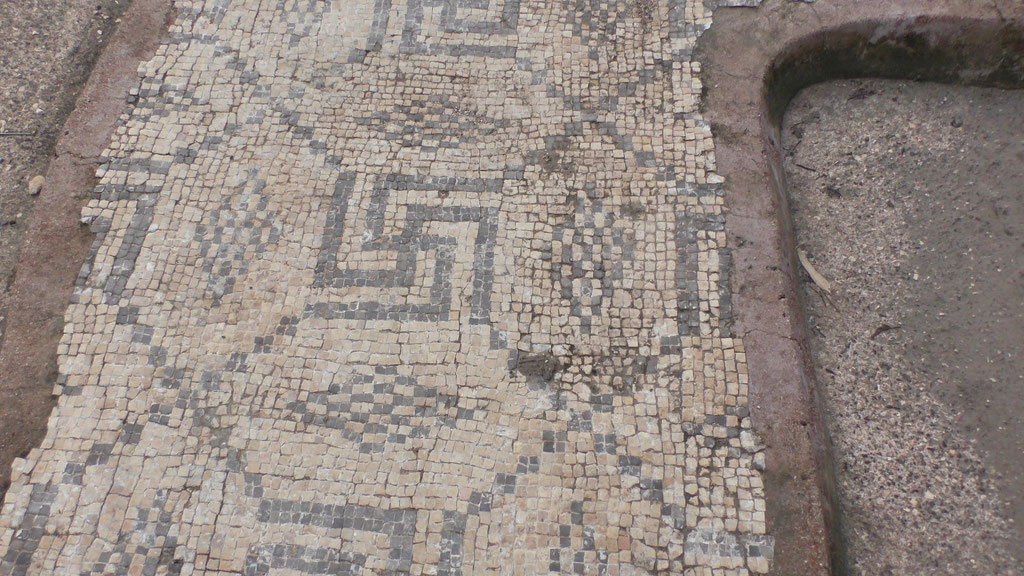 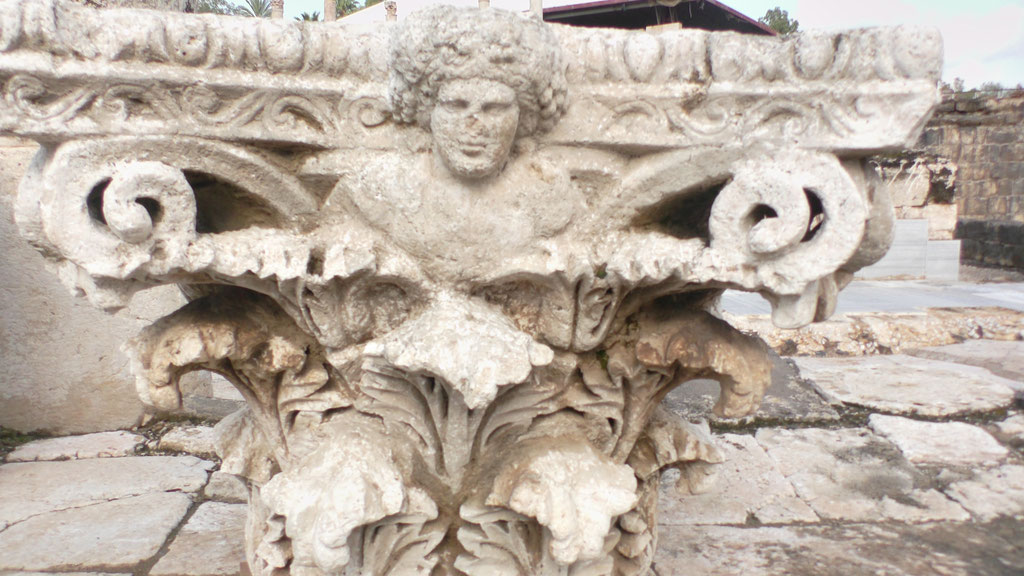 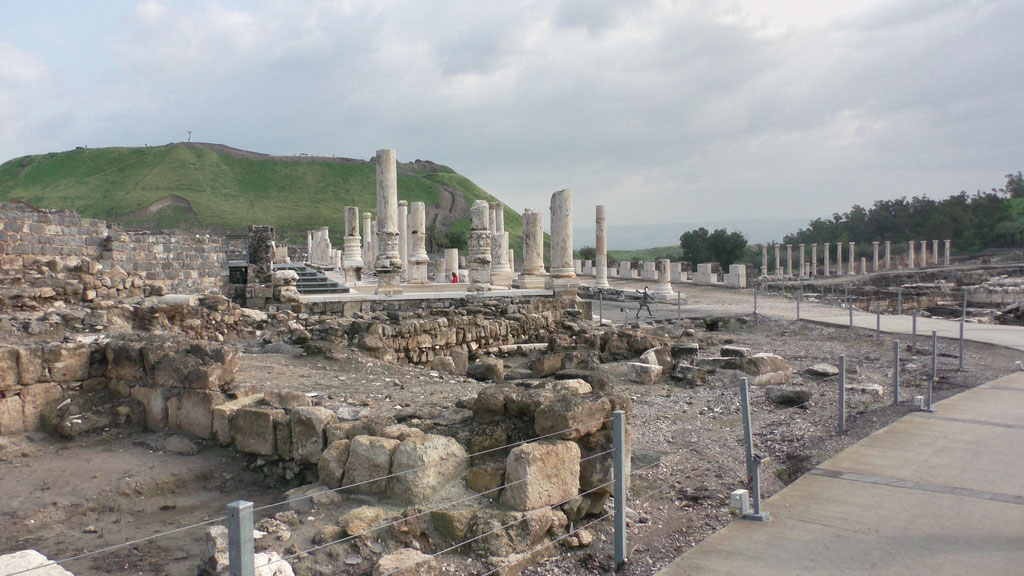 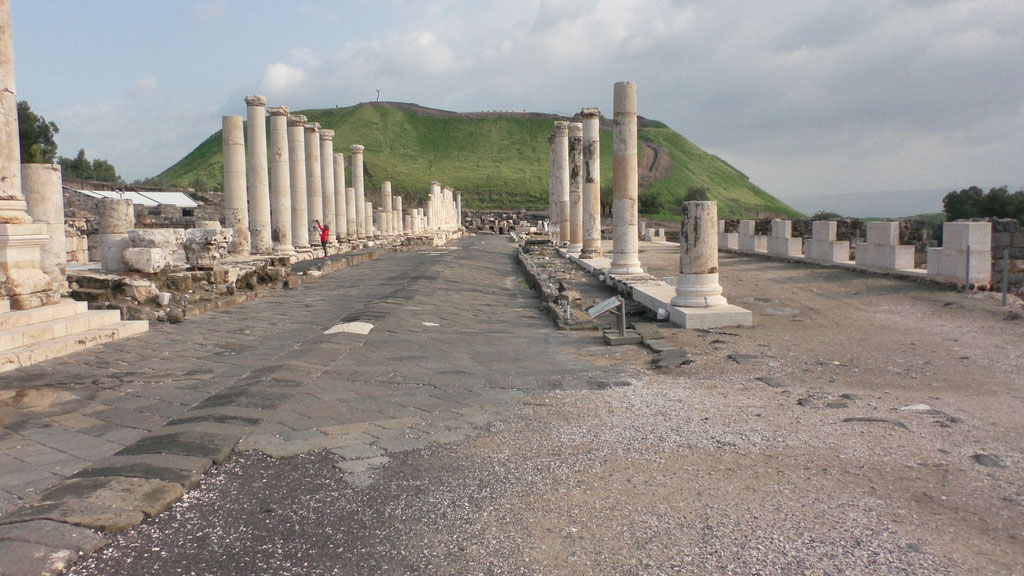