Basilica of the Annunciation in Nazareth

Fr. Bargil Pixner of the Benedictine community of the Dormition Abbey in Jerusalem writes in his book "With Jesus in Jerusalem",

"...During the period when the office of the high priest was in the hands of the Boethius, the Essene priests also took part in the Temple service. Among them may have been Zechariah, the father of John the Baptist. On the basis of the topographical  references, it seems that Mary's parents lived in the sphere of influence of the Essene movement. In such an environment, it is understandable that the pious girl Mary wanted to devote herself entirely to God, and perhaps, in her early years, took a vow of celibacy...

In families that were influenced by Pharisaic thinking (as is today's Jewry), such a vow was unthinkable, because for them the first divine command was: Be fruitful and increase in number, fill the earth ( Genesis 1:28). The Essenes Jews, however, had such a vow of marital celibacy. Philo, OMNIS HOMO PROBUS, 84, Josephus, BELL.JUD. 2,160).

In the Bible (Numbers 30:3-6) we read of abstinence vows, which refer to the time limited denial of beverages and fine foods, such as wine and raisins (grapes). The first description of sexual celibacy appears in connection with the Essenes. In the Great Temple Scroll, found in Qumran such custom is described. (11 QMiq 53,16-54,5

Could it be that both possibilities presented in the Temple scroll became true for Mary?"

"'Greetings, you are who are highly favored! The Lord is with you.'

Mary was greatly troubled with the words and wondered what kind of greeting this might be. But the angel said to her: 'Do not be afraid, Mary, you have found favor with God. You will be with child and give birth to a son, and you are to give him name Jesus. He will be great and will be called the Son of the Most High. The Lord God will give him the throne of his father David, and he will reign over the house of Jacob forever; his kingdom will never end."

Basilica of The Annunciation

The first church was built at this site between the 4th and 5th centuries AD. This Byzantine church did not survive and was replaced by the Crusaders in the 12th century but was destroyed by the Mamluks in 1263. The Local Moslem Bedouin ruler Dahr El Omar allowed the Christians to rebuild the church while he was on pilgrimage to Mecca in 1730 AD. The dimensions of the edifice were 72 by 55 feet and was expanded an additional 29.5 feet in 1877.

American writer Mark Twain describes his visit to the 19th century Annunciation Church in his book, The Innocents Abroad,

''We entered the great Latin Convent which is built over the traditional dwelling-place of the Holy Family. We went down a flight of fifteen steps below the ground level, and stood in a small chapel tricked out with tapestry hangings, silver lamps, and oil paintings.

A spot marked by a cross, in the marble floor, under the altar, was exhibited as the place made forever holy by the feet of the Virgin when she stood up to receive the message of the angel. So simple, so unpretending a locality, to be the scene of so mighty an event!

The very scene of the Annunciation - an event which has been commemorated by splendid shrines and august temples all over the civilized world, and one which the princes of art have made it their loftiest ambition to picture worthily on their canvas; a spot whose history is familiar to the very children of every house, and city, and obscure hamlet of the furthest lands of Christendom; a spot which myriads of men would toil across the breadth of a world to see, would consider it a priceless privilege to look upon.''

The construction of the new, magnificent church began in 1960 but not before extensive excavations were carried out by the renown Franciscan architect, Father  Bellarmino Bagatti.

He unearthed beautiful mosaics of the Byzantine church and the wall of the 12th century Crusader church. The finds have been reconstructed and incorporated into the new church.

Professor Giovanni Muzio, from Milan, Italy, was chosen as the architect for the new Church which was built in a new style called Novecento, created in Milan. He also used the Brutalist architectural style, which characterized by massive pured concrete walls with rigid geometric style. Construction lasted 9 years and the Basilica was designed by the Italian Catholic architect, built by the Jewish Israeli building company, Solel Bone, who mainly employed Arab workers. Truly it was an international project which unified spiritual values. The Basilica was inaugurated on March 23, 1969.

This new Annunciation Church is an impressive 213 ft long, 89 ft wide and 180 ft high and its demensions make it the largest church in Middle East!

Truly this Church fulfills the words  of Mary from the Gospel:

"For behold, henceforth all generations will call me blessed" (Luke 1:48). 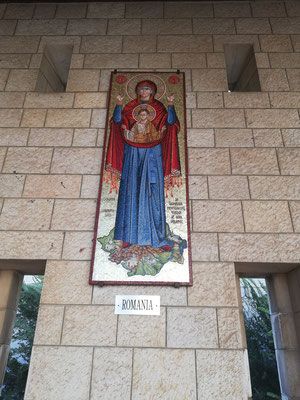 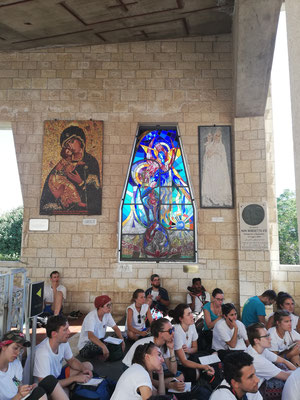 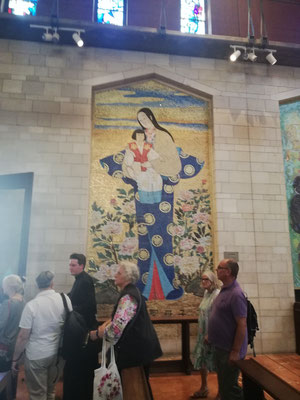 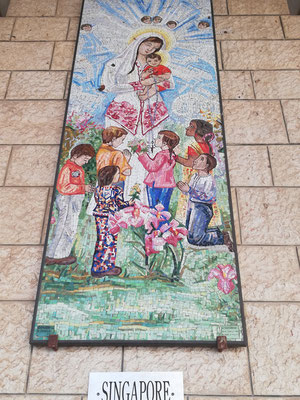 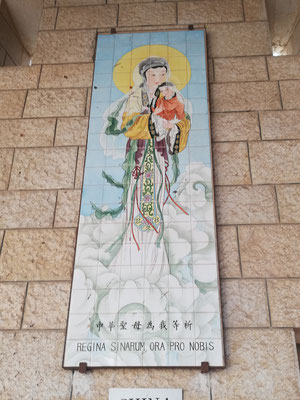 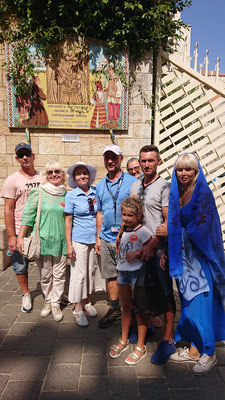 The most holy site within the church is the House of Mary. It is a natural cave that was deepened and used by humans as a dwelling or storage place in 12 th to 8th centuries BC. The First Byzantine church was erected right next to the cave in the 4th to 5th centuries AD. Today, the size of a cave is 18 by 20 ft and its height is 12.7 ft. 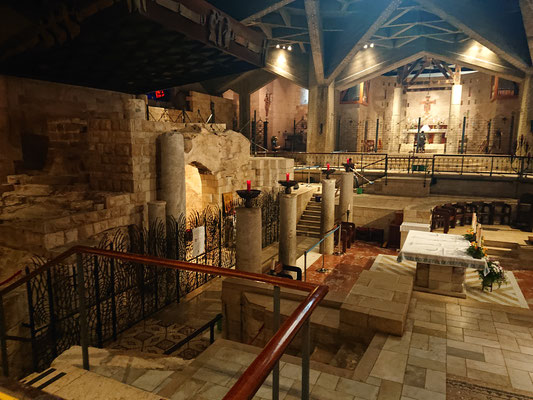 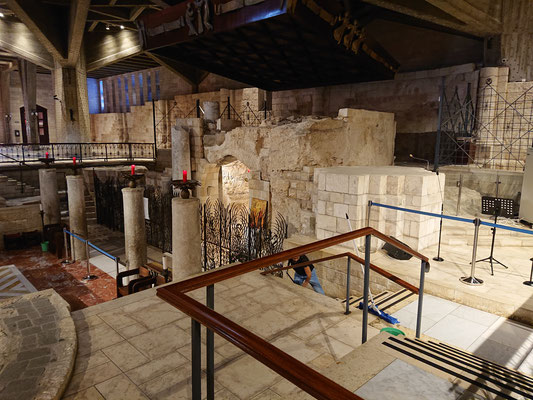 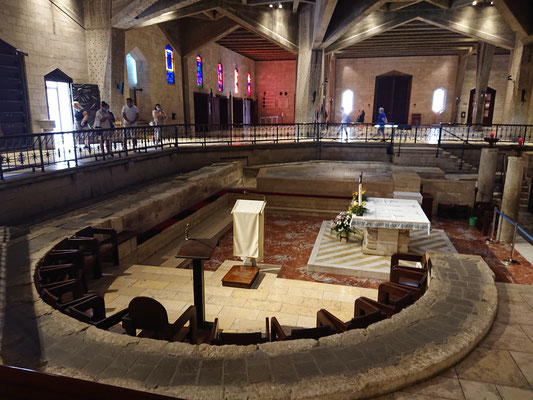 The cave is seen on the left of the first picture from the left, on the low picture there can be seen a stylobate (continuous base that supports a row of columns) of the former Byzantine (5th century) church.

The Upper Church serves as the worship place of the local Arab Catholic congregation gatherings and masses. In the central apse, there is a large painting of the Italian painter and stage designer Salvatore Fiume, "The triumph of the Universal Church". 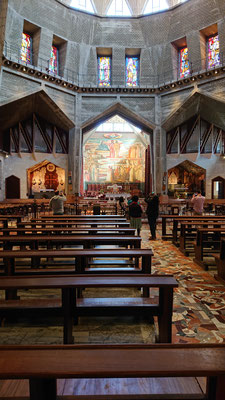 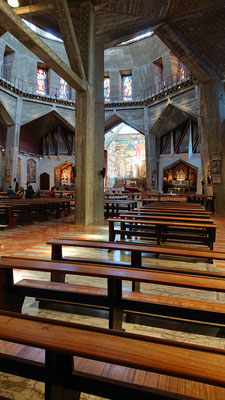 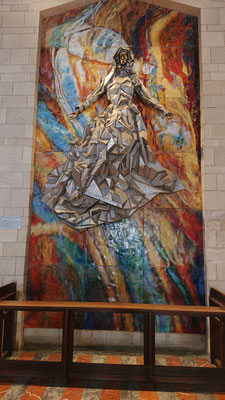 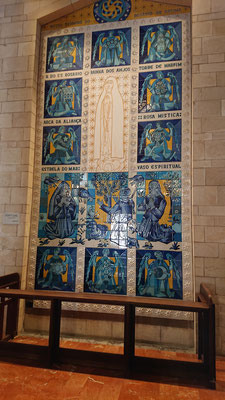 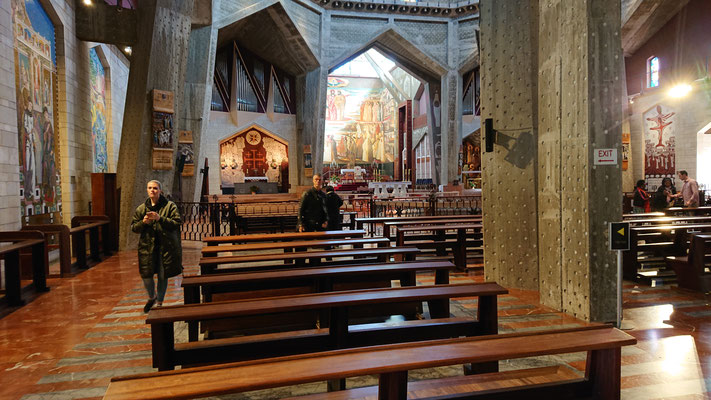 The third picture on the right shows the artist from the USA, Charles Madden who welded together more than 1000 different pieces of stainless steel and plated them together to make a dress for Mary. 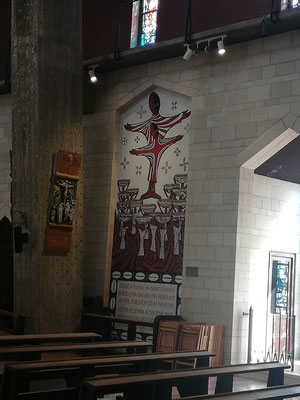 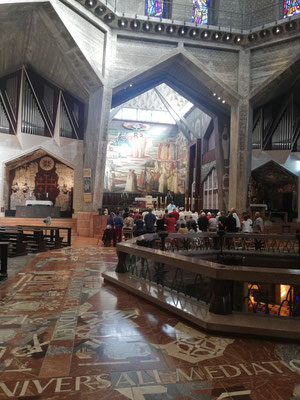 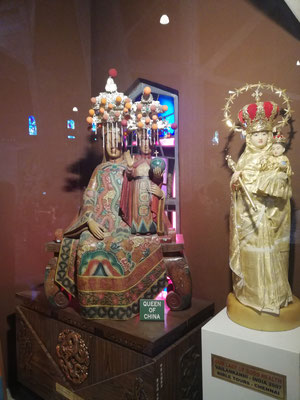 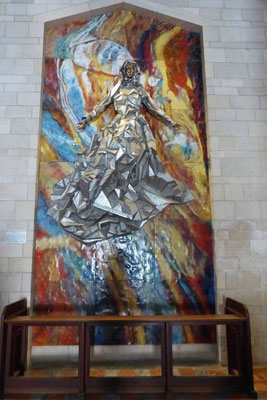 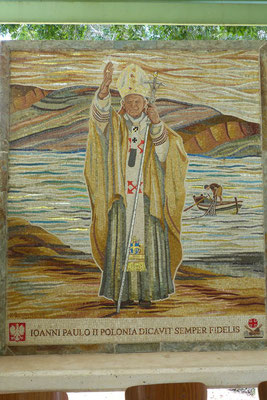 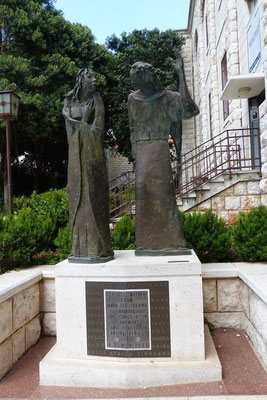 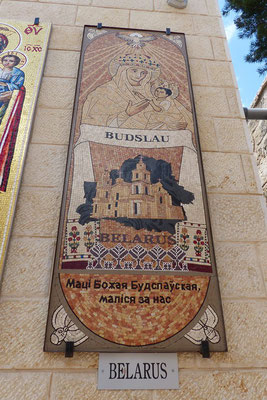 Statue of Mary from India and 'Mother of China on the first picture from the right.

The archaeological museum was opened in 1970 on the compound of the church and is managed by a famous Italian Franciscan archaeologist Michele Pichirilo.

The major exhibits of the museum are 5 famous column capitals form the Crusader period found during excavations. There was found a part of Apostle Peter's statue and other interesting artefacts.

The Basilica of the Annunciation is' a must visit' place for those who admire art and architecture and are interested in archaeology.