There was a little village at the place called Strato’s Tower (or Straton’s) which may have been a prominent structure used by navigators named after a local king or ruler.

The Greek historian, Strabo, reported there was a small ship landing at Strato’s Tower and that is all that is known about this area before Herod’s time. The latter received the whole Sharon Valley and Strato's Tower as a gift and tribute for loyalty from the Roman Emperor Augustus. Out of gratitude, Herod called his new coastal city Ceasarea.

It was built largely of imported white marble, specified by a “magnificent plan” devised by Herod and took 10 to 12 years to build the city and inaugurated around 13 -12 BC. The city had a royal palace, civil buildings, an amphitheater, a hippodrome, aqueducts, warehouses, artificial port and a defense wall surrounding it.

One of the most beautiful and splendid structures in Caesarea was a temple described as, “remarkable for its beauty and grand proportions; it contained a colossal statue of the emperor, not inferior to the Olympian Zeus which served as its model” (Josephus Flavius, 1st century Jewish historian).

Along the Mediterranean coast, from Jaffa 30 miles south to Dor 8 miles north there was no natural bay.  For the first time in the history, Herod engineered and built an artificial port in Caesarea which was completely man made. He submerged an enormous stone breakwater around 200 feet wide. The entrance to the haven was designed to face north for protection from southwestern storms and sand which washed in from the Nile River to the south. According to the description of Josephus Flavius, the port was as big as the one in Athens; therefore, one of the largest in the ancient world at that time.

The city was planned and built in typical Roman style with great ambition to become a provincial hub and a capital of the king. Herod imported white marble and many structures were built from it. Then he also built a magnificent palace, a theater (considered to be the oldest in the Middle East) and a hippodrome where he loved to preside and participate in the horse chariot races!

After Herod's death, the Romans made Caesarea a provincial center from which they ruled Judea. Procurators established court facilities and the Roman auxiliary forces recruited from the local pagan population which were stationed at Caesarea.

Caesarea in the New Testament

Caesarea is often mentioned in the New Testament.

"And the following day they entered Caesarea. Now Cornelius was waiting for them, and had called together his relatives and close friends. As Peter was coming in, Cornelius met him and fell down at his feet and worshiped him. But Peter lifted him up, saying, ‘Stand up; I myself am also a man.’ And as he talked with him, he went in and found many who had come together. Then he said to them, ‘You know how unlawful it is for a Jewish man to keep company with or go to one of another nation. But God has shown me that I should not call any man common or unclean. Therefore, I came without objection as soon as I was sent’ " (Acts 10:24-28).

For the first time in history, the teaching of Jesus broke through the barrier of ministering to the Jewish people only and shared the Gospel with all. This resulted in the first recorded conversion and baptism of the Gentiles.

"Then Peter said, ‘Can anyone keep these people from being baptized with water? They have received the Holy Spirit just as we have. So, he ordered that they be baptized in the name of Jesus Christ" (Acts 10:47).

Another famous apostle's destiny was tied with Caesarea. Acts 21:7-9 tells us about missionary journeys of Paul:

"And when we had finished our voyage from Tyre, we came to Ptolemais, greeted the brethren, and stayed with them one day. On the next day we who were Paul’s companions departed and came to Caesarea, and entered the house of Philip the evangelist, who was one of the seven, and stayed with him. Now this man had four virgin daughters who prophesied."

This is a great testimony that there was one of the earliest Christian communities in Ceasarea even prior to arrival of apostle Paul! Later, Paul was arrested in Jerusalem and sent to Caesarea where he was imprisoned for two years in Herod’s palace in the area reserved for the Procurator Felix. His case was heard by King Herod Agrippa. Paul, as a Roman citizen, requested to appeal to Caesar in Rome and was sent there by ship from the Caesarea harbor. Both Governor Festus and King Agrippa words were recorded in the book of Acts concerning the destiny of Paul.

"Then Festus, when he had conferred with his council, answered, “To Caesar you   have appealed; to Caesar you shall go” (25:12).

Paul was probably detained in the Praetorium, a fortress or governor's residence, when he was in Caesarea. In Rome, he was allowed to dwell outside the military camp. His trial took two years and according to the early church historian Eusebius, Paul was eventually released only to be arrested later again by Nero, who started to execute Christians during his reign.

Little else is known of the development of the Christian church in Caesarea after that time until the early third century. The famous Christian theologian of the third century, Origen, established a Christian school at Caesarea where he taught the pagans for 23 years who were interested about basics of faith. In the fourth century, when Christianity became an official religion of the vast Roman Empire, there was a bishopry in Caesarea headed by another famous teacher and Church historian named Eusebius.

Caesarea became the provincial capital Judean Province before the name was changed to Syria-Palestina. It was ruled for the next six centuries during the Roman and Byzantine Periods until the Moslem conquest in 639-640 AD.

In front of the reconstructed theater, there is an exhibition of statues discovered in Caesarea during the excavations. There are just a few in Caesarea with the most valuable statues are on display in Israel's museum in Jerusalem. The statues give an idea of the beliefs of the local population and about the splendor of Greco-Roman art and architecture. 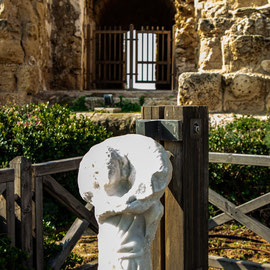 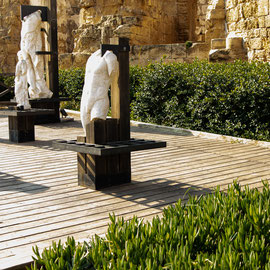 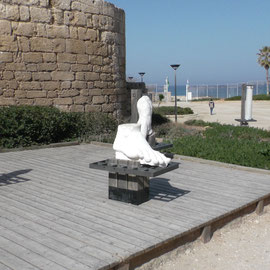 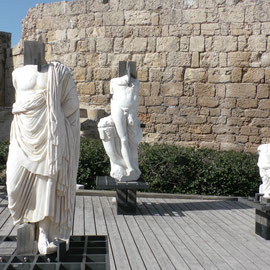 King Herod the Great built the theater in Caesarea to sponsor performances which the Greeks called spectacles.

There were 4000 seats in the theater (3800 now) and it was divided into upper and lower levels. There were entrances (vomitoria) to both levels. The theater consisted of seats (cavea), the stage (scaenae frons) and of course there was an orchestra for performances. In the Roman period these performances turned into rather cheap amusement for the crowds intended to distract them from complaints and riots. Native pantomimes replaced serious tragedies and dramas of the rich Greek culture. Sponsors of the performances gained affection of the crowd.

Herod and his heirs would appear wearing royal garments leading to the excitement and applause of the public. The theater thus served also for the political announcements and addresses. We can safely assume that the following events described by Josephus Flavius and the evangelist Luke took place in Caesarea's theater.

“ In 44 C.E., the Jewish king Agrippa, king of Judea, stood in the theater of Caesarea, clothed in a garment woven of silver threads that glittered in the first rays of sunlight. To those who looked upon him, he seemed awesome and terrible. The spectators were the leading men of the kingdom. Everyone in positions of authority had gathered in Caesarea to celebrate athletic contests founded by Agrippa’s grandfather, Herod the Great, who had built the city two generations earlier. The king’s flatterers chanted with one voice, ‘Be merciful to us,’ adding, for if before we feared you as a man, now and henceforth we confess that you are more than human’. Agrippa did not reject this adulation, which dangerously approached idolatry, nor did he admonish his flatterers for their explicit impiety. Hence God punished him with a sharp pain in his belly, from which he died in agony five days later “(Josephus Flavius).

“Now about that time Herod the king stretched out his hand to harass some from the church. Then he killed James the brother of John with the sword. And because he saw that it pleased the Jews, he proceeded further to seize Peter also...And he went down from Judea to Caesarea, and stayed there...So on a set day Herod, arrayed in royal apparel, sat on his throne and gave an oration to them. And the people kept shouting, “The voice of a god and not of a man!”  Then immediately an angel of the Lord struck him because he did not give glory to God. And he was eaten by worms and died”                                          (Acts 12:1-3,18; 21-23).

There is an ongoing dispute among the historians about who built Caesar’s palace.

The remains of the promontory palace excavated at the site are comprised of two wings. The upper wing perhaps served administrative purposes and called the Praetorium as it is in other palaces.  A king would give audience to his subjects, have his decrees proclaimed and local rulers would judge people in this part of the palace.

It is suggested that precisely here, another famous character from the New Testament, apostle Paul was tried and judged. The book of Acts tells that Paul was arrested by the Romans in Jerusalem and “brought by night to Antipatris. The next day... they came to Caesarea and had delivered the letter to the governor, they also presented Paul to him... And he commanded him to be kept in Herod's Praetorium" (Acts 23:31-32, 34).

In 1961, an Italian archaeological team led by Antonio Frova discovered a stone with a sensational inscription mentioning the Roman governor Pontius Pilate. The partial inscription reads (conjectural letters in brackets):

The probable interpretation and translation from Latin into English reads:

"To the Divine Augusti (this) Tiberieum

The prefect of Judea

In effect, this inscription is the earliest and the only contemporary mention of Pontius Pilate known from the New Testament and writings of Jewish historians, Philo and Josephus Flavius, and Roman historian, Tacitus. 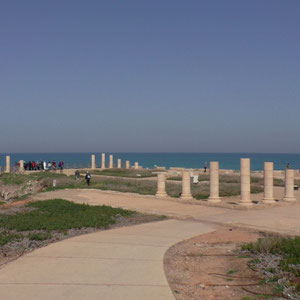 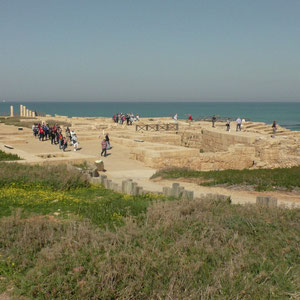 Ruins of one of the spacious rooms in the palace probably served as Praetorium although there is evidence that the whole area of the upper palace was renamed in the later period and probably served the same function. Perhaps this was a spot where the most successful and fruitful apostle of Jesus, Paul, had been judged!

Ruins of The Synagogue

In the northern part of Caesarea ruins were discovered of the Jewish synagogue, maybe this was the same one described by Josephus?

"The Jews in Caesarea had a synagogue alongside a piece of ground belonging to a Greek citizen...

There was a Sabbath and when the Jews gathered in the synagogue a Caesarea partisan had placed a chamber-pot upside down at the entrance and was sacrificing birds on it. This infuriated the Jews, who felt their law was violated and the site desecrated. The steadier, gentler people advised an appeal to the authorities; the quarrelsome element and youthful hotheads burned for a fight. The Cesarean partisans stood waiting for them, for they had sent men to sacrifice by prearrangement and the clash soon came..."                                  (Josephus Flavius, The Jewish War).

The sparks of the Great Jewish revolt in 66 -72 AD began from Caesarea and ended tragically with the destruction of the Temple and expulsion of the Jews from their homeland.