"After this, there was a feast of the Jews, and Jesus went up to Jerusalem. Now there is in Jerusalem by the Sheep Gate a pool, which is called in Hebrew, Bethesda, having five porches.  In these lay a great multitude of sick people, blind, lame,  paralyzed   waiting for the moving of the water.

For an angel went down at a certain time into the pool and stirred up the water; then whoever stepped in first, after the stirring of the water, was made well of whatever disease he had.

Now a certain man was there who had an infirmity thirty-eight years.  When Jesus saw him lying there, and knew that he already had been in that condition a long time, He said to him, ‘Do you want to be made well?’

The sick man answered Him, ‘Sir, I have no man to put me into the pool when the water is stirred up; but while I am coming, another steps down before me.’ Jesus said to him, ‘Rise, take up your bed and walk.’  And immediately the man was made well, took up his bed, and walked. And that day was the Sabbath” (John 5:1-9).

From the Synoptic Gospels of Matthew, Mark and Luke, Jesus visited Jerusalem only once (aside from the pilgrimages to the Holy City during his infancy and adolescence).

According to the Gospel of John, there were three or four such visits,

" After this there was a feast of the Jews and Jesus came to Jerusalem" (John 5:1).

"The Jewish feast was approaching - the decree of tabernacles... and He came to the feast not openly, but as if secretly " (John 7:2,7).

Jesus' visit to Jerusalem during the winter Holiday of Renewal which commentators usually associate with the holiday of Hanukkah,  established one and a half centuries before the birth of Christ.

The information in the Gospel of John complements the facts found in the synoptics (Mark, Matthew, Luke), which were apparently taken from a single source. Without John's record, it is impossible to have a complete picture of the life of Jesus or understand the originality of his teaching, set forth by the evangelists and revealed by his apostles.

*Of course, I ask viewers of the video to  be understanding of my Jewish sense of humor! Those who want to know more about Hanukkah can refer to my article, The Meaning of Hanukkah.

The Pool of Bethesda

According to the Gospel story, the Pool of Bethesda was located near the city walls and the Sheep Gate. Today, its location is in the Moslem quarter of the Old City of Jerusalem on the path to Beth Zeta Valley. The Gospel was first recorded in Greek (at least as far as can be established) but linguists attempted to restore it to the original Hebrew and Aramaic,  the languages spoken in Judea during the 1st century. The goal of this endeavor was to determine the names of geographical locations, clarify the meaning of some words and assist understanding of the teachings of the Gospel through the context of the original languages.

The name Bethesada likely corresponds  to  Beit Khesda, which means the House of Mercy in Aramaic.  Another possible name is Beit Tsaida, or the House of Hunting (fishing), based on the fact that there was fishing in the reservoir.

It was venerated by the Jews for its healing abilities in the time of Jesus.

During Jesus' time, there  was a "flock" gate  and a market of the same name. The market and the pool were outside the city gates at that time. During the construction of the so-called Third City Wall by King Agrippa (44 AD), the pool was included into the city limits. As early as the 4th century AD, this pool was revered as the place described in the Gospel of John (chapter 5).

A shrine and a healing pool known as Asclepiuon was built by the Roman Emperor, Hadrian, in the 2nd century AD which he dedicated to the Greek god of healing, Asclepius (or Serapis, which means therapy). In ancient Greek mythology, Asclepius is a hero and god of medicine, the son of Apollo and father of Hygieia (Hygiene), the goddess and personification of health, cleanliness and sanitation and Panacea, the goddess of universal remedy. Our modern words, "hygiene" and "panacea", are strongly associated with medicine and health.

Typical healing methods included immersion in the curative waters of the pools (somewhat like a modern spa) as well as massage, diet and rest. Those who had been healed made contributions to the temple of Asclepius and often their tributes included plaster reproductions of the parts of their bodies that had been healed.

The pool of Bethesda was important and embraced by the Greco-Roman population and images of the pool were often included in their religious art.

The first church located here was built in the 5th century and called Probatica (the Pool of the Sheep Church) or its alternative name, the Church of the Lame Man.

The church did not survive to modern times and the ruins were identified during the excavations. 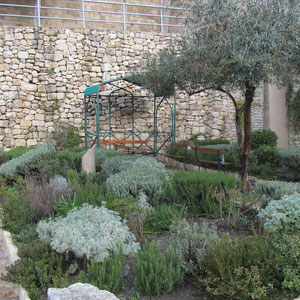 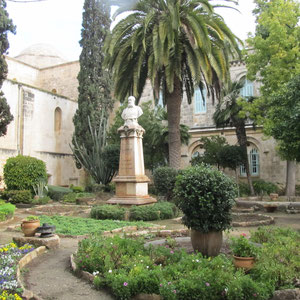 St. Anne's Church was erected between the years 1131-1138, during the reign of Melisende, Queen of Jerusalem. The shrine was built on the site that was revered as the parental home of the Virgin Mary and named after Saint Anne, the mother of Mary.

Anne is not mentioned in the New Testament, and information about Mary's parents came from the apocryphal Gospel of James which was written no earlier than 150 AD.

Unlike many Christian churches in the Holy Land, St. Anne's Church was not destroyed during the conquests of Saladin (1187). On the contrary, Saladin turned the church into a Muslim school (Al Madrasa Al-Salahiye, 1192). This school later became very prestigious and there is an inscription with the name of the school in Arabic above the entrance to the church.

In 1856, the Ottoman Sultan Abdul Mesjid transferred ownership of the church and the adjacent territory of Bethesda to France, as a token of gratitude for the assistance provided to Turkey during the Crimean War against Russia.

Since then, due to the Status Quo Ante bellum agreement, the church and the surrounding property, including Bethesda. France  diligently protects its interest as do other countries who own holy places and shrines in Jerusalem and throughout the Holy Land.

Archaeological digs at Bethesda were first conducted in the 19th century by Conrad Schick (1822 -1901), an architect, archaeologist and a Christian missionary from Germany.  He discovered a large tank located 100 feet northwest of St. Anne's church which he identified as the Pool of Bethesda.

It was called the Upper Pool and existed in the 8th century BC when a dam was built across Beth Zeta Valley. An additional pool was built around 200 BC.  He is also credited with the discovery of the small healing pools of Asclepeion (as mentioned earlier), two large pools and a dam between them. On top of the dam are the ruins of the Byzantine church, Probatica. An interesting  statue was discovered, the foot of a woman named Pomona with a dedication to Asclepius.

Later excavations uncovered the remains of the 5 th century Byzantine church and 12 th century Crusader church at the site.