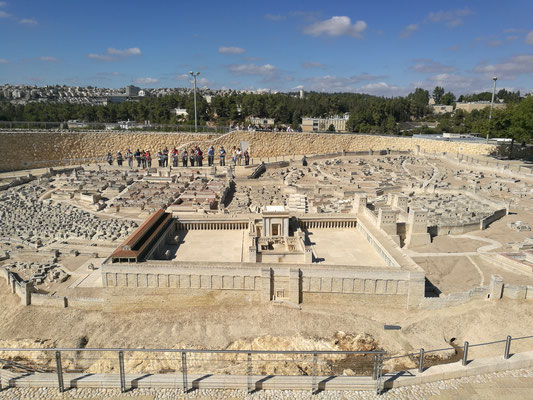 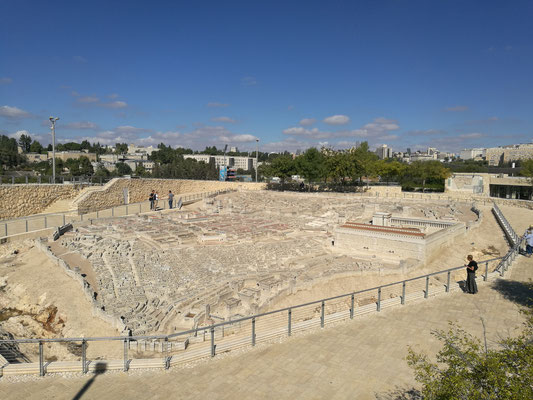 The view of Jerusalem and the Temple on the model

This unique model of Jerusalem portrays the city from the time of the Second Temple. It was created by renowned historian, Professor Michael Avi Yonah. The project was built due to commission of Hans Kroch. He was the owner of the Holy Land Hotel located in Jerusalem's Bayit Vegan neighborhood. The project was  dedicated to the memory of his son, Yaakov, who fell in the Israeli War for Independence (1948). The model was placed on the hotel grounds and Professor Yonah continued to work on it until his death in 1974 then Professor Yoram Tzafir continued the work to completion.

The model is built to a scale of 1:50 and measures about 1,000 square meters (10,764 ft). It is built from the region’s famous yellow Jerusalem limestone which was used to construct ancient buildings and walls which continues to be used today for construction.

In 2006, it was relocated to the grounds of the Israel Museum. The move was accomplished by sawing the model into 100 pieces and then it was reassembled on site. The model teaches the topography and architecture of Jerusalem in the period prior to the destruction of the Temple in 70 AD. At that time, the city covered 445 acres. The general image of the city is correct, but the architectural details of the buildings are inaccurate.

The model also provides information about the location of holy places within Jerusalem. Where were the locations of King David's tomb, Bethesda and Siloam pool, Calvary and the site of Jesus' burial?  These puzzling questions require an answer.

Whenever possible, the model was based on archaeological evidence and historical documents from the region. The writings of Flavius Josephus, the Roman Jewish historian (1st century AD), provided descriptions of Jerusalem from his time. The Talmud and other historical sources were also used to gather details about the city.