Gospel Places at the Sea of Galilee

Et Tabha is a corruption of the Greek word Heptapegon which means "Seven Springs". Indeed this shore of the Sea of Galilee has geothermal saline springs which warm the water and fishing on the Sea is best in this area. For instance, the famous St. Peter's tilapia fish loves the warm water!

Flavius Josephus, the Roman Jewish historian, tells us that the soil in this region was particularly rich and there was “not a fruit tree which would fail to grow here”. Two thousand years later,  his words are confirmed while viewing  the nearby fields and groves of bananas, olives, mangos and avocados.

In this area, there are two churches which are venerated as holy sites where Jesus performed the Miracle of the Feeding of 5,000 and where He appeared to the disciples for the third time after His resurrection when He admonished Peter to “feed My sheep”.

According to the earliest Byzantine Christian tradition in the 4th century CE, the shore of the Sea of Galilee is identified as a place where Jesus and His disciples would often gather.

The history of the area may have been preserved by a certain Jew named Joseph who was from Tiberias. He was converted to Christianity and later helped identify these sites based on local tradition.

The Church of the Multiplication

On this site located on the northwestern shore of the Sea of Galilee, Catholic Benedictine monks from  Germany built a hostel for pilgrims in 1889. Later, the beautiful mosaics from the Byzantine St. Joseph's Church were discovered, dating from the 4th to 5th centuries.

The Church of the Multiplication of the Loaves and Fishes was constructed  at the same place in 1982,  preserving the ancient mosaic floor.  This site is traditionally accepted as the place where Jesus performed the miracle of the Feeding of the 5,000 with an abundant supply of food for the multitude from a boy’s lunch of 5 barley loaves and 2 fish.

Lady Egeria, a pilgrim from Spain, visited the Holy Land in the 4th century and mentioned the church at the site where the faithful venerated the miracle of multiplication.

“After this Jesus went away to the other side of the Sea of Galilee, which is the Sea of Tiberias. And a large crowd was following him, because they saw the signs that he was doing on the sick. Jesus went up on the mountain, and there He sat down with His disciples. Now the Passover, the feast of the Jews, was at hand.

Lifting up his eyes, then, and seeing that a large crowd was coming toward him, Jesus said to Philip, ‘Where are we to buy bread, so that these people may eat?’ He said this to test him, for he himself knew what he would do. Philip answered him, ‘Two hundred denarii worth of bread would not be enough for each of them to get a little.’

One of his disciples, Andrew, Simon Peter's brother, said to him,‘There is a boy here who has five barley loaves and two fish, but what are they for so many?’ Jesus said, ‘Have the people sit down.’ Now there was much grass in the place. So the men sat down, about five thousand in number.

Jesus then took the loaves, and when He had given thanks, He distributed them to those who were seated. So also the fish, as much as they wanted.  And when they had eaten their fill, He told his disciples, ‘Gather up the leftover fragments, that nothing may be lost.’ So they gathered them up and filled twelve baskets with fragments from the five barley loaves left by those who had eaten.

When the people saw the sign that he had done, they said, ‘This is indeed the Prophet who is to come into the world!’” 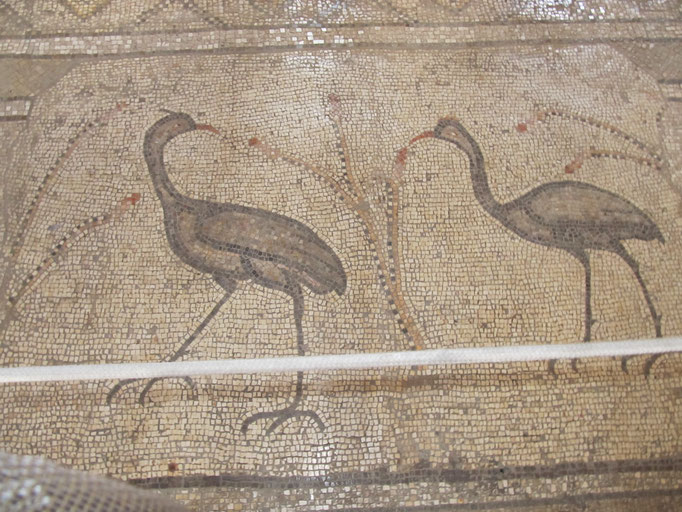 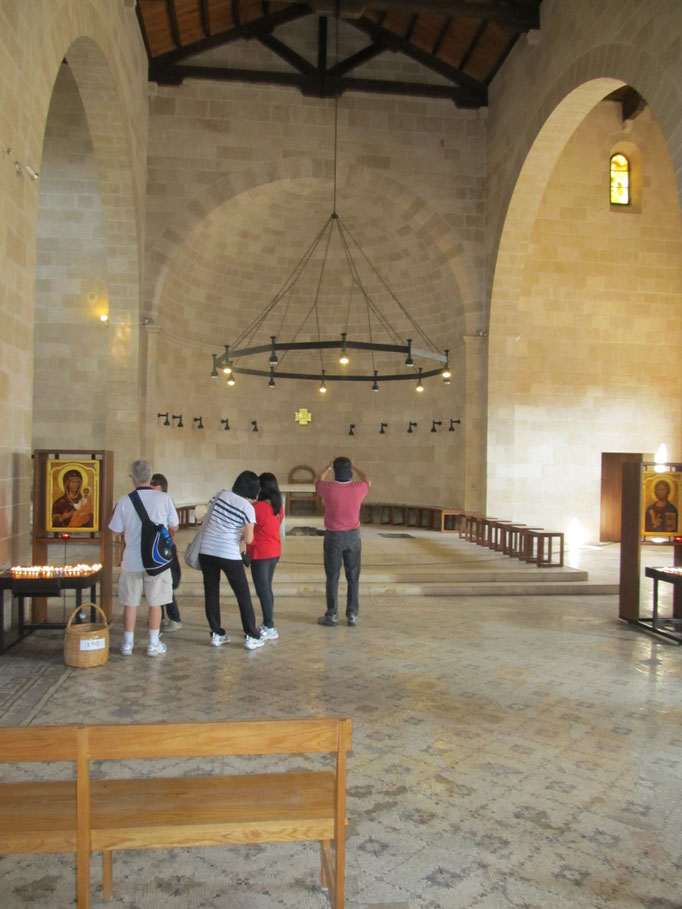 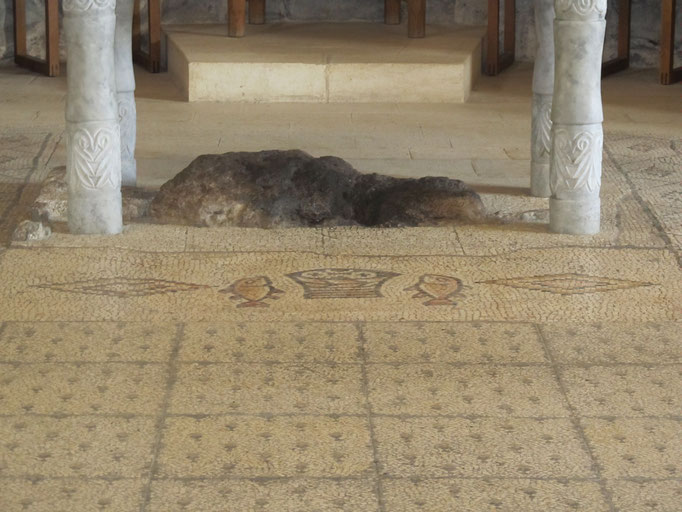 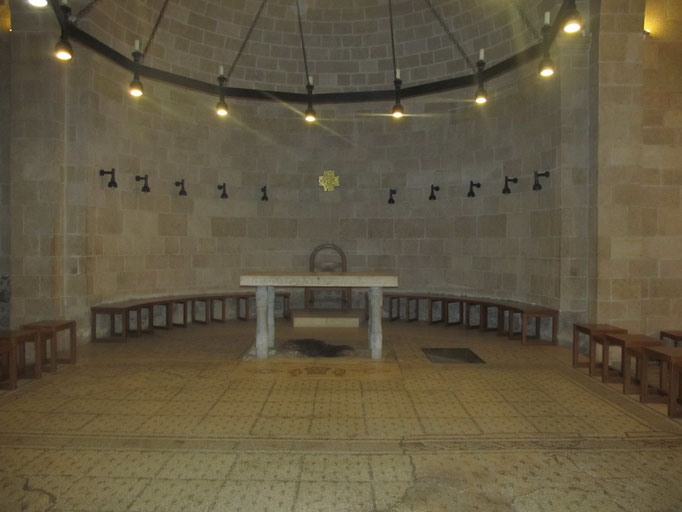 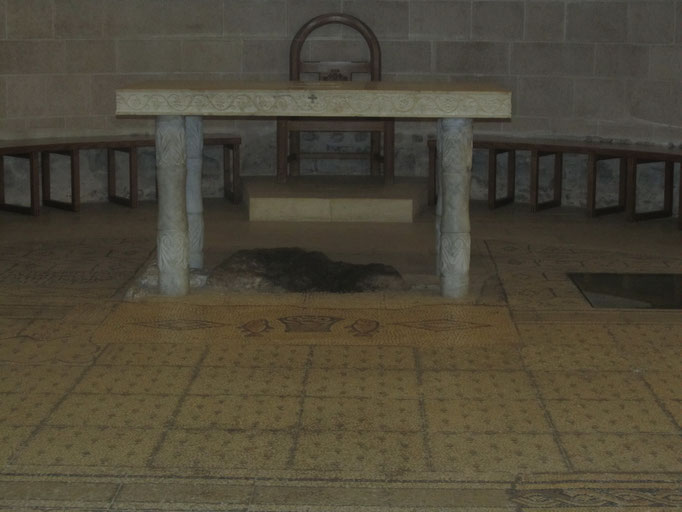 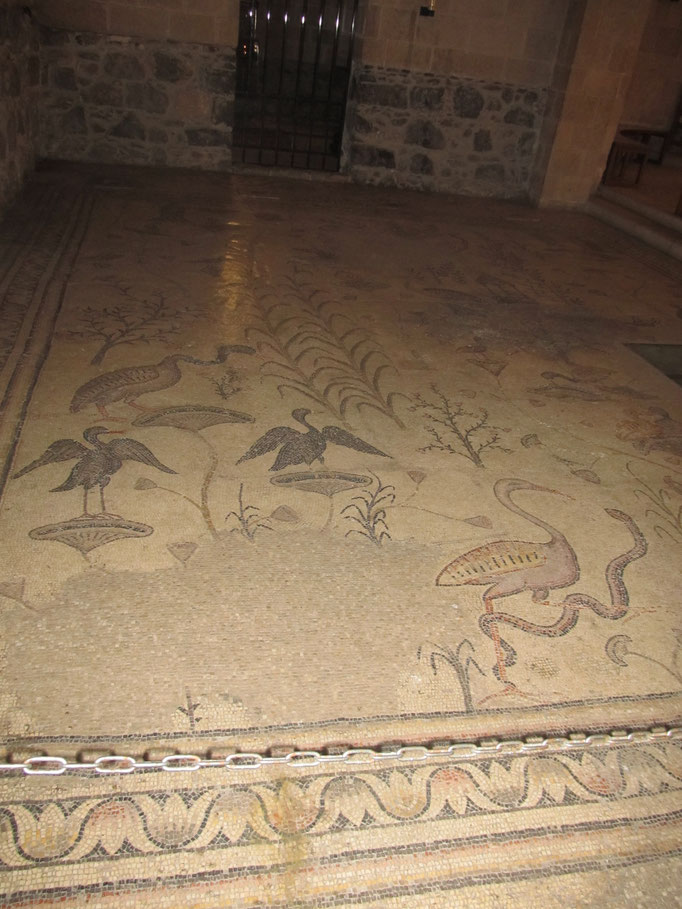 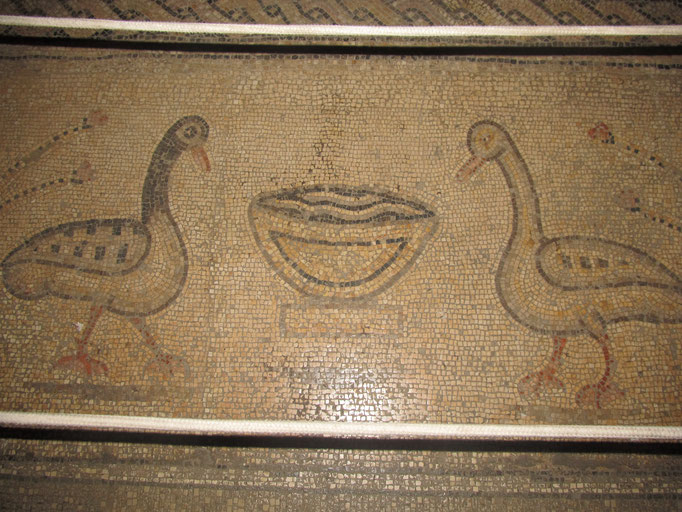 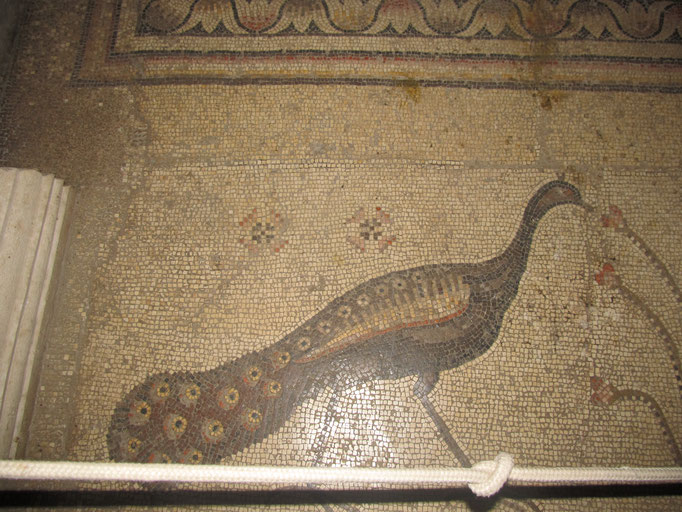 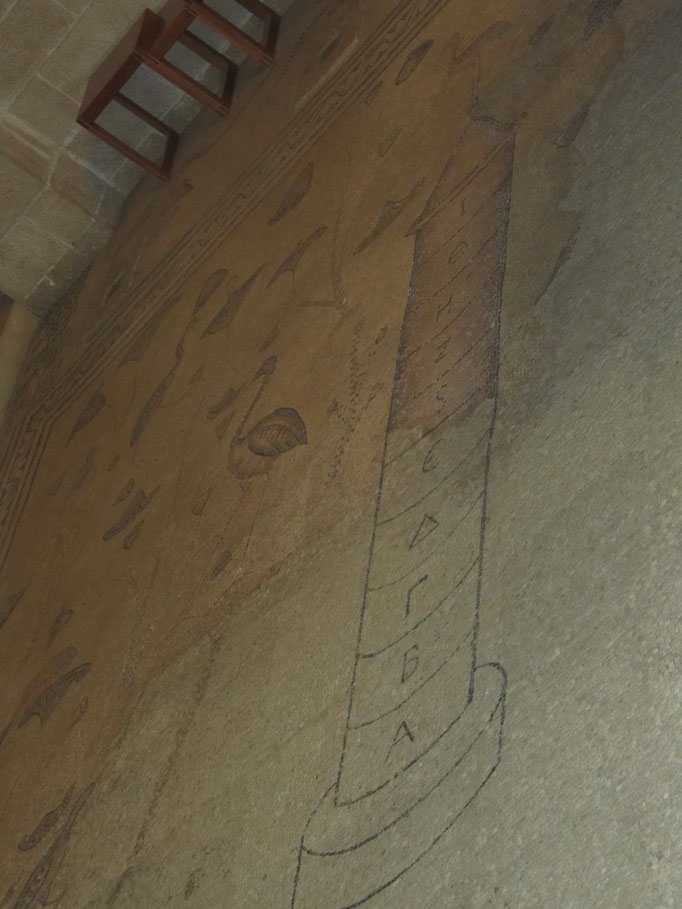 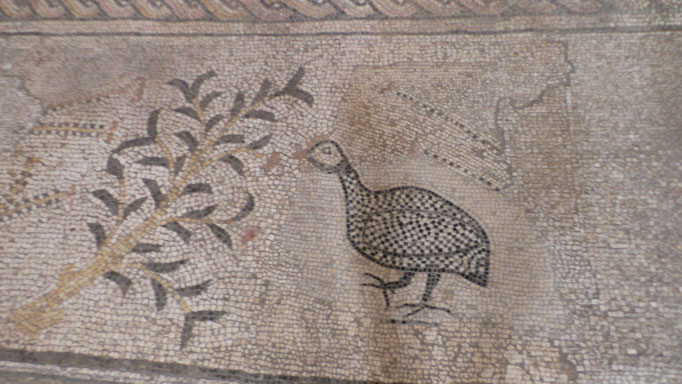 The famous mosaic depicts 4 (?) loaves of bread and two fish with the dorsal and belly fins. There 22 birds depicted on the mosaic floor.

Church of the Primacy of Peter

Lady Egeria, visited the area around 381 AD and recorded there were “some stone steps where the Lord stood." Although she did not specifically report a church, it is known there was one on the site around 350 AD. In its east end, there was a flat rock which was  stated to be the table on which Jesus offered breakfast to the disciples when he appeared to them at the Sea of Galilee following His resurrection. It was the third time He had appeared to His followers and enabled them to catch a miraculous amount of fish!

In the 9th century, the church was referred to as the Place of the Coals, referring to the fire which Jesus made to cook the fish. The church survived longer than any other church in the area but was finally destroyed in 1263. The present Franciscan chapel was built on the site in 1933, although the walls of the late 4th-century church are clearly visible on three sides.

Jesus meets the disciples at the Sea of Tiberias

“After this Jesus revealed himself again to the disciples by the Sea of Tiberias, and he revealed himself in this way. Simon Peter, Thomas (called the Twin), Nathanael of Cana in Galilee, the sons of Zebedee, and two others of his disciples were together. Simon Peter said to them, ‘I am going fishing.’ They said to him, ‘We will go with you.’ They went out and got into the boat, but that night they caught nothing.

Just as day was breaking, Jesus stood on the shore; yet the disciples did not know that it was Jesus.  Jesus said to them, ‘Children, do you have any fish?’ They answered him, ‘No.’ He said to them, ‘Cast the net on the right side of the boat, and you will find some.’

So they cast it, and now they were not able to haul it in, because of the quantity of fish.  That disciple whom Jesus loved therefore said to Peter, ‘It is the Lord!’ When Simon Peter heard that it was the Lord, he put on his outer garment, for he was stripped for work, and threw himself into the sea.

The other disciples came in the boat, dragging the net full of fish, for they were not far from the land, but about a hundred yards off.

When they got out on land, they saw a charcoal fire in place, with fish laid out on it, and bread. Jesus said to them, ‘Bring some of the fish that you have just caught.’ So Simon Peter went aboard and hauled the net ashore, full of large fish, 153 of them. And although there were so many, the net was not torn. Jesus said to them, ‘Come and have breakfast.’

Now none of the disciples dared ask Him, ‘Who are you?’ They knew it was the Lord. Jesus came and took the bread and gave it to them, and so with the fish. This was now the third time that Jesus was revealed to the disciples after He was raised from the dead” (John 21:1-15).

On this occasion, Jesus admonished Simon Peter three times to feed His sheep:

“When they had finished eating, Jesus said to Simon Peter, ’Simon, son of Jonah, do you truly love me more than these?’ ‘Yes, Lord’, he said, "you know that I love you". Jesus said, "Feed my sheep’” 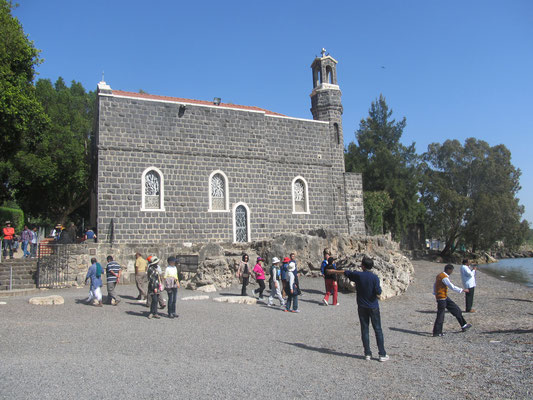 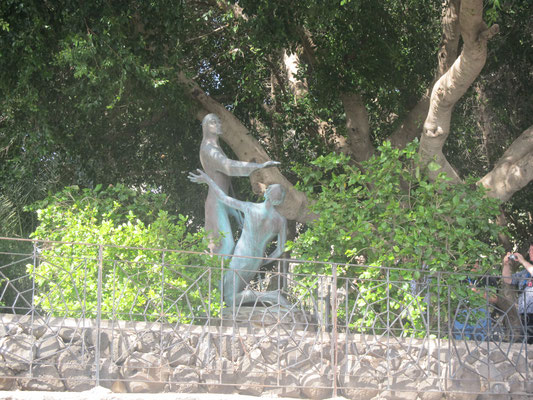 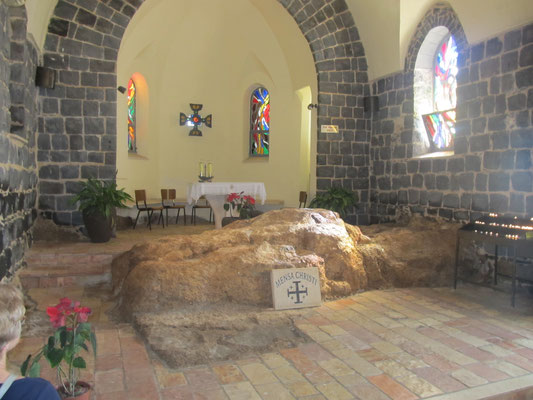 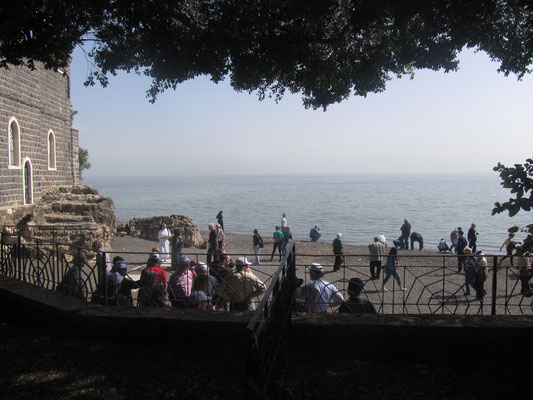 The rock which serves as a church's foundation has steps leading to the water, perhaps part of the ancient fisherman's wharf. The rock inside the church is called Mensa or Tabula Christi ("the table of Christ"). It is believed that He prepared a breakfast for the disciples here.

Mount of Beatitudes is a hill in northern Israel, situated on the Korazim Plateau.

It is that very spot where Jesus is believed to have delivered the Sermon on the Mount. Its negative altitude (around 25 m - 82 ft below sea level, nearly 200 m - 656 ft above the Sea of Galilee) makes it one of the lowest summits in the world. Pigrim from Spain, Lady Egeria visited the church of 'Loaves and fishes' in 381 and wrote: "Near there on a mountain is the cave to which the Savior climbed and spoke the Beatitudes." She called it Eremos.

Both Popes Paul VI and John Paul II celebrated Mass at the church during their pastoral visits to the Holy Land.

The current church sits uphill from the ruins of the Byzantine church of the fourth century. Mosaic on display at Capernaum. The modern church was built between 1936 and 1938 near the site of the fourth-century Byzantine ruins.

The floor plan is octagonal, the eight sides representing the eight Beatitudes.

The church is Neo-Byzantine in style with a marble veneer casing the lower interior walls and gold mosaic in the dome.

Around the altar are mosaic symbols on the pavement representing Justice, Prudence, Fortitude, Temperance, Faith, Hope, and Charity.

sermon on the mount

"And seeing the multitudes, He went up on a mountain, and when He was seated His disciples came to Him.  Then He opened His mouth and taught them, saying:

sermon on the plain

"And He came down with them and stood on a level place with a crowd of His disciples and a great multitude of people from all Judea and Jerusalem, and from the seacoast of Tyre and Sidon, who came to hear Him and be healed of their diseases, 18 as well as those who were tormented with unclean spirits. And they were healed. 19 And the whole multitude sought to touch Him, for power went out from Him and healed them all.

Then He lifted up His eyes toward His disciples, and said:

“Blessed are you poor,

For yours is the kingdom of God.

Blessed are you who hunger now,

For you shall be filled.[e]

Blessed are you who weep now,

For you shall laugh.

Blessed are you when men hate you,

And when they exclude you,

And revile you, and cast out your name as evil,

For the Son of Man’s sake.

Rejoice in that day and leap for joy!

For indeed your reward is great in heaven,

For in like manner their fathers did to the prophets."