Wildflowers of the Land of Israel

Plants are first mentioned in the Book of Books of the Jewish people - the Bible. The very first chapter of Scripture, Genesis (1:11) says:

"Then God said, “Let the earth bring forth grass, the herb that yields seed, and the fruit tree that yields fruit according to its kind, whose seed is in itself, on the earth”; and it was so."

Throughout the centuries, Jewish people have treated various plants in the Land of Israel with reverence and considered holy. Trees and groves were often held sacred and glorified in poetry and chants as symbols of beauty, prosperity, peace. In ancient times, the land of Israel was poor in grains, fruits and vegetables so wild herbs and spices were used for food.

Thousands of plant species grow in valleys, steppes and mountains of Israel but only a few of them (about 120 species) are mentioned by name in the Bible which makes it difficult to identify them today.

Most flowering plants had specific names in biblical times, but in the Holy Scripture they were often given only generic names. The first plants to bloom every spring in the Land of Israel are anemones, tulips, poppies, which are referred to in the Book of Songs of Solomon as simply "flowers" (ניצנים),

"The flowers appear on the earth; The time of singing has come, And the voice of the turtledove Is heard in our land" (Song of Solomon 2:12).

Flower:  late December to  March, diameter 3-8 cm, with 5-8 red, white or blue petal sepals. The flowers are singly arranged on a high stem with a whorl of small leaves just below the flower.

The botanical name, "anemone" (in Greek, anemos), means wind and "crown" means garland.  In Hebrew, the name is kalanit (כלנית), derived from kala (כלה), which means bride.  In Aramaic, the name is similar, kalanita (כלניתא), probably because this flower is beautiful as a bride on her wedding day.

Immanuel Lui (1854-1944), a rabbi and scientist from Hungary, named this plant Kalanit, from kalanita (כלניתא), which is mentioned in the Babylonian Talmud.

Anemones are often associated with the "lilies of the field"  mentioned in the Gospel,

"Therefore, I say to you, do not worry about your soul, what you eat and what to drink, nor about your body, what to put on. Is not your soul more than food and your body more than clothes?

... And why do you care about clothes? Look at the lilies of the field, how they grow: they neither toil nor spin; but I tell you that Solomon in all his glory did not dress like any of them" (Matthew 6: 25, 28-29).

There are many legends about this flower in Greek mythology. According to one of these tales, Anemone was a beautiful nymph and daughter of the wind. Zephyr (the spring wind) and Boreas (the god of the western winds) both fell in love with her. Flora, the goddess of flowers, found out and became angry with Anemone and turned her into a flower. Since then, when Zephyr comes, the flower has already wilted and they are forever separated.

Another myth explains why anemones are called "windy flowers". The story explains they were born because of the Greek god, Adonis, a youth of unearthly beauty. He fell in love with two goddesses, Persephone (the mistress of the underworld) and Aphrodite (the goddess of love). Adonis spent part of the year in the kingdom of the dead with Persephone, and part of the year on earth with Aphrodite.

Upon learning this, the goddess Artemis (the defender of chastity and justice) sent a wild boar to kill Adonis when he was hunting. He was gored by the boar and died in Aphrodite's arms. She wept bitterly over her fallen beloved and her tears mingled with his blood. Anemones sprouted from her tears and , and adonises appeared  from the blood of Adonis (a genus of 20-30 species of flowering plants). This legend explains the mythical appearance of two different flowers from the buttercup family, the anemone and adonis.

Here is an interesting fact about these beautiful flowers. In the vicinity of the Jerusalem Mountains, red anemones are more common than blue ones, and near the Sea of Galilee, the hillsides are covered with blue and white flowers in spring. After flowering, a peculiar sort of nose  grows from the anemone which turns into a  bump containing seeds that bursts open and the seeds are scattered by the wind. 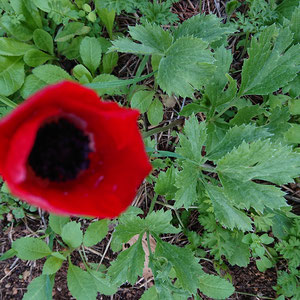 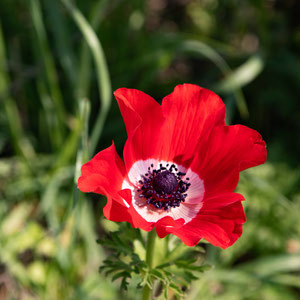 Rana means frog, and ranunculus is a small frog.

Here's what he wrote about buttercups:

"The rival of the anemone in brightness and beauty, although less common and smaller in size, is the Asiatic buttercup."

Here is a folklore story,

The Three sisters, an Israeli tale

Once upon a time there was a handsome prince in a distant land. After many years of promiscuity and a stormy bachelor life, the prince decided to marry and announced that he would review the brides. Hundreds of women decided to try their luck, including three sisters: Anemone, Buttercup and Poppy.

Along with most of the women in the area, the sisters rushed to the bazaar to purchase beautiful clothes and the most impressive accessories. There were many women everywhere, jostling  and crowding while shopping. Within a few minutes, the sisters lost  lost sight of each other so each continued to shop on her own. They met again once they reached home and to their mutual surprise and indignation, they discovered that they had all purchased scarlet dresses.

After shedding many tears, the sisters came to their senses and found an original solution; each sister added a unique accessory to her red dress. Anemone added a white scarf that she brought back from a trip to India. Buttercup added a green sash, adorned the dress with sequins and applied glossy lipstick. Mack chose to wear a black beaded necklace.

On the appointed day, the sisters entered the banquet hall and won the heart of the prince in a matter of minutes. He spent a full day with each of them, and after three days admitted that he could not make a decision which sister he should choose to be his bride. The sisters were fascinated by the prince's beauty and each dreamed of becoming his wife.

The prince decided to take all three to his palace and marry them. He devoted a separate season to each of them and enjoyed their love until the time came for the next wife. Since then, every year anemone is the first to bloom, with a white scarf around the stamens. Next comes the scarlet buttercup with bright, shiny leaves and typically green sepals flanking the petals resembling a belt. The poppy completes the season and has a "necklace" of characteristic dark circles on the petals. Thus explains the differences between the 3 sister flowers! 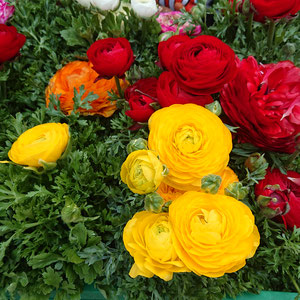 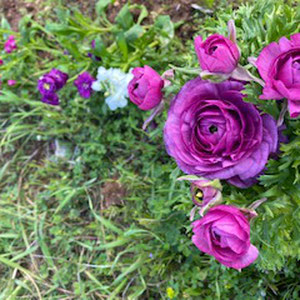 The mustard plant is a species of plant in genus Brassica and the family Brassicaceae. Mustard (Σινάπι in Greek and חרדל or hardal in Hebrew) is an annual herb with extensive branches and yellow flowers with  small seeds in the pods.

In the Mediterranean region, it has been cultivated for several thousand years and has a wide range of medicinal properties used to treat colds, rheumatism, skin rashes, sciatica pain and respiratory ailments.

The mustard plant grows in the Middle East and Europe, China and even Siberia. The ancient Greeks and Romans cultivated it as early as the 4th century BC and used it to preserve meat and provide flavor.

Mustard is one of the most common plants in Israel. It grows wild in ravines and along roadsides of the coastal regions of the country including Samaria, Galilee, the Jezreel Valley, the Golan Heights and the upper Jordan Valley.

Mustard seed is a flavorful and versatile spice. Grinding and mixing the seeds with water, vinegar and other spices, such as tumeric (to provide the characteristic yellow color), makes condiment  mustard.

The seeds are round and very small (2-3 mm in diameter). Although insignificant in appearance, this tiny seed is the topic of the parable of the Kingdom which is recorded in the New Testament Gospels of Matthew, Mark and Luke.

“The kingdom of heaven is like a mustard seed, which a man took and planted in his field. Though it is the smallest of all seeds, yet when it grows, it is the largest of garden plants and becomes a tree, so that the birds come and perch in its branches” (Matthew 13:31-32).

Mustard was a common plant in Judea during the time of Jesus, so it would have been obvious to the listeners that the mustard "tree" was a metaphor. The usual height of wild mustard is 70 cm (28 inches), but there are plants which grow to 2m (6.5 feet) tall.

In the 1st century, historian Pliny the Elder wrote about characteristic properties of the mustard plant, including its health benefits and its extreme danger to the garden. Once sown, mustard spreads and destroys the garden, filling it (Natural, chapter 19).

Because mustard is an invasive plant, Jewish sages warned against growing mustard in the garden and only in fields where it could remain separate from other plants (Mishna, IIth century AD). 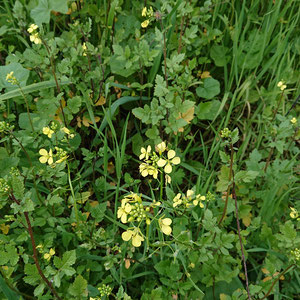 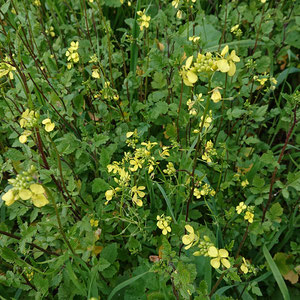 Flowers are white, pink, and purple.

In 2007, the cyclamen was chosen to be the national flower of the State of Israel!

During ancient times, the Jewish people used cyclamen extract for  medicinal purposes.   Fishermen mixed cyclamen tubers with flour to catch fish by dropping the tubers into the water which poisoned them.